ALSTEF Automation S.A., a French company formed in 1961, has been the pioneer of the automated high bay storage in France. The company has then taken advantage of its expertise in material handling technology to develop a full range of baggage handling equipment with the first 100% hold baggage screening system being delivered to ADP (Aéroports de Paris) for Paris-Orly airport in 1998. 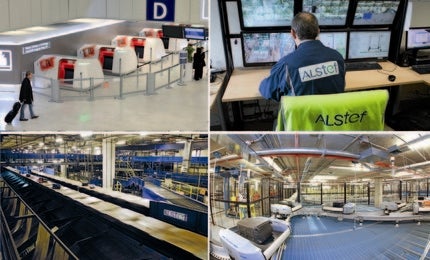 The French company ALSTEF is one of the major global suppliers of baggage handling systems (BHS) and designs innovative and sustainable solutions for airports.

Its quality system is focussed on customer satisfaction with a strong emphasis on the implementation of efficient and reliable processes to guarantee a timely delivery of a system that will meet all customers’ specifications.

With a design team of 90 engineers and technicians, Alstef develops its own products, including:

In addition ALSTEF integrates the DCV (destination coded vehicle) BEUMER autover® system, an advanced technology that is now in operation in Canada, France, UAE and Morocco.

ALSTEF has a long track record of successful operations. The most representative examples consist of the international and domestic terminals at Istanbul Atatürk Airport in Turkey. ALSTEF has been working at Atatürk Airport for the last 15 years to bring the system capacity to 50MPax. During this period, ALSTEF has installed 300 check-in desks, 25 carousels, two tilt-tray sorters, 12 primary explosive detection systems (PEDS) and seven explosion detection systems (EDS).

In 2010, the latest versions of BAGWARE®Sac and BAGWARE®View were installed to replace existing sort allocation computer (SAC) and supervisory control and data acquisition (SCADA) systems. The international terminal capacity was increased to 24,000 bags/h.

In 2013 two early bag stores based on BAGShuttle technology were installed to adapt the BHS to the evolution of the transfer traffic.

As part of the evolution of airport check-in systems towards more fluidity and speed, ALSTEF proposes BAGXpress®, an automatic baggage drop-off machine. The design is based on a patented, innovative concept defined by Aéroports de Paris with the intention of offering better service to passengers.

BAGXpress® is able to process a high number of bags per hour requiring only a short time to process each bag. BAGXpress® can process up to 120 bags an hour, with an average of 20 seconds a bag checked in, and a delay of only ten seconds between two bags.

This simple and economical solution was designed by modifying baggage drop-off positions to integrate automated equipment. Depending on their needs, operators can choose to complete the baggage check-in process in automatic mode using BAGXpress lite, or in manual mode using the conventional assisted drop-off positions that remain functional.

BAGXpress lite performs all the required controls such as bag weighing and measuring, reading the bag tag and association of baggage/boarding pass via a DCS connection.

Advantages for airports and airlines:

The product developed by ALSTEF is designed to transport bags at high speed between several lines of belt conveyors. Seven high-speed shuttles are dispatching the bags to sixty storage lanes in the early bag stores of Istanbul Atatürk International Airport.

BAGVeyor includes several types of baggage handling conveyors such as check-in, collector and transport conveyors and is designed to meet the demanding specifications of airports.

BAGClaim are carousels based on friction drive technology. They are part of the 100% HBS system delivered by ALSTEF.

Alstef has developed a unique expertise in the integration of Beumer autover® DCV. This technology increases redundancy, as well as reduces transfer time and operating costs. Major airports that have trusted ALSTEF to install a DCV-based solution for their baggage handling system include Toulouse-Blagnac Airport, Montreal Pierre-Elliott-Trudeau International Airport and NICE Côte d’Azur.

BAGWARE®Sac manages the sort allocation, controls all the baggage screening process and communicates with the airport IT infrastructrure. Its BAGWARE®Vol module is dedicated to the chute allocation and BAGWARE®Memory keeps a record of all data processed during one year or more.

BAGWARE®View is the SCADA system. It provides the primary user interface to the control system for the purpose of data acquisition and plant control within the BHS.

ALSTEF is an expert in the maintenance and operation of baggage handling systems with more than 15 years of experience.

In Montreal, ALSTEF is fully responsible for the operation and maintenance of the trans-border BHS. At Paris CDG, the company has a permanent staff of 36 technicians and engineers in charge of the BHS maintenance contracts, the most recent being the Terminal 1.