Headquartered in Sydney, Australia, SkyCool has developed and patented a maintenance-free roof coating which has proven so effective in reflecting solar heat loads and radiating internal heat from airport terminals that air-conditioning energy consumption has been nearly halved.

According to CSIRO, Australia’s national science research agency, this ground-breaking technology “almost defies the conventional laws of physics.” It combines the coolness of white surfaces through a non-glaring solar reflectance of 95% with a very high black-body thermal radiation of 94%. Much of that radiation occurs in a manner which by-passes the atmosphere’s natural greenhouse effect by exploiting the atmosphere-to-space window. Thus, SkyCool radiates heat away from the building, creating a net outward flow of heat.

The principal benefit of a significant reduction in air-conditioning energy consumption is unmatched in the industry. For non-air-conditioned airport buildings such as warehouses, SkyCool substantially cools the interior, often below the ambient temperature – even during the daytime.

Between 2004 and 2006 SkyCool was applied in three stages to some 43,000m² of terminal roofing at Melbourne International Airport – each stage dependent upon the success of the previous.

Stage one had the dual purpose of saving energy on the domestic concourse and extending the life of the ageing roof by at least another ten years. As a result of the SkyCool application in the initial stage, the airport was able to shut down 16 auxiliary air-conditioning units. With the completion of the subsequent stages, the airport reported that its primary air-conditioning systems’ peak loads now operate at some 40% lower than before the SkyCool application – substantial additional savings added to those from the shutting down of the 16 auxiliary units.

Melbourne International Airport advised the Airports Council International (ACI) of their results. ACI produced a case study and reported the SkyCool effect at a UN-WTO environmental conference held in September 2007 in Davos, Switzerland.

Prior to Melbourne International Airport’s application of SkyCool, the coating was subjected to a comprehensive two-year field trial by Woolworths, Australia’s premier national retailer. Woolworths compared a supermarket with a SkyCool-coated roof to a nearby supermarket with a standard roof. Their engineers found that monthly air-conditioning energy consumption fell between 38% and 61%, depending upon weather conditions, an overall average saving of 47%.

SkyCool is a water-based paint-like coating and can be applied without disrupting the business of the building. Roof preparation and application can be accomplished at around 1,000m²/day.

SkyCool is patented in the US, Australia, Singapore and South Africa; and has patents pending in Europe, Japan, China and a number of other countries.

SkyCool technology has been installed on more than 500,000m² of wide-span building roofs.

SkyCool's solar reflective coating that was applied to the roof of DHL's warehouse reduced its energy use by over 25%, providing more than $40,000 of savings a year. 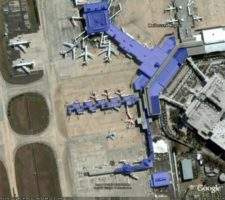 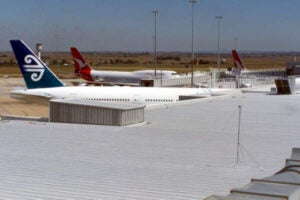 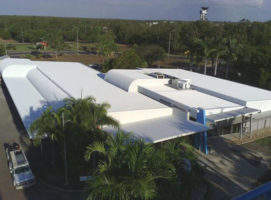 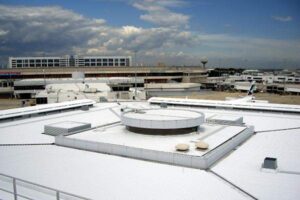 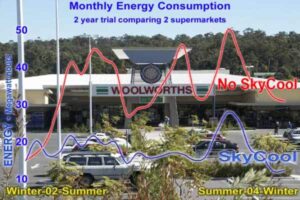 SkyCool's solar reflective coating that was applied to the roof of DHL's warehouse reduced its energy use by over 25%, providing more than $40,000 of savings a year. 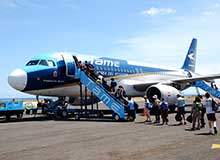 Seymour Airport, also known as Galapagos Ecological Airport, is the world’s first green airport. It is located in Isla Baltra, one of the Galápagos Archipelago islands in Ecuador.

SkyCool technology has been installed on more than 500,000m² of wide-span building roofs.

In 2015 the Mirvac owned St Mary's Village shopping mall had its 17,000m² roof protected with the SkyCool coating.