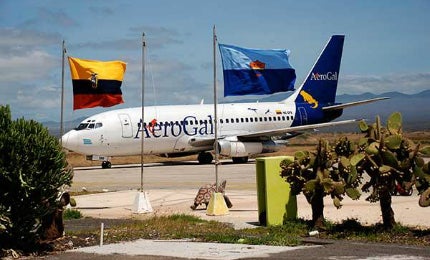 Seymour Airport, also known as Galapagos Ecological Airport, is the world’s first green airport. It is located in Isla Baltra, one of the Galápagos Archipelago islands in Ecuador. It is also one of the main gateways for tourists travelling to the Galápagos Islands.

The new green airport was opened in December 2012. It is one of the only two airports serving the archipelago. It is operated by ECOGAL, a subsidiary of Corporación América, which operates 53 airports in Latin America and the Caribbean.

The airport was awarded LEED Gold certification by the USGBC in July 2015.

The airport, earlier known as Seymour Island Airfield, was used by the United States Army Air Force (USAAF) to secure the South American coastline and the Panama Canal from Japanese submarines during World War II. First US troops arrived at the airport in April 1942.

Most of the troops were, however, withdrawn from the airport by September 1945. The military facility was deactivated in April 1946, and a communications unit was inactivated in February 1948.

The base was handed over to the Ecuadorian government after the end of World War II in 1948. The base infrastructure that remained at the location was used for the commercial aviation activities that began in 1963.

The Ecuadorian Government opened an international bidding for the construction, operation and management of the Seymour Airport in July 2008. Corporación América was preferred for the development of the $35m airport project. ECOGAL was awarded a 15-year concession by the government of Ecuador in April 2011 to operate the airport.

The design and construction of the new airport considered the surroundings to create a minimal impact on the ecosystem, thus abiding by the regulations of the US Green Building Council (USGBC).

The new terminal was built using the recycled steel tubes recovered from oil drilling activities in the Amazon region. The terminal, which covers an area of 6,000m2, was completed at a cost of more than $24m.

The VIP lounges in the Galapagos Ecological Airport are operated by Vip Airport Club, which offers exclusive services to more than 50 airports across the world. The lounges offer pleasant and sustainable environment, personalised assistance, internet access, free and unlimited non-alcoholic beverages and snacks, as well as a wide range of cocktails, wines and specialty dishes.

Sustainability of the terminal

The new terminal building uses green technologies such as solar and wind power, as well as seawater desalination to achieve energy savings. Approximately 75% of the materials from the old terminal were reused by the new building. The airport employs a number of measures to reduce the energy consumption by approximately 40%.

Most of the rooms within the terminal building lack air conditioning; hence a bioclimatic design was integrated to maintain comfortable conditions throughout the year. The orientation of the new terminal, and the optimisation of natural light and natural ventilation further minimise the energy requirements. Almost 100% of the energy required to operate the airport is produced through renewable sources.

The airport has a single runway, which is designated 14/32. The asphalt-surfaced runway is 2,401m- long and 35m-wide, and handles landings/take-offs only during the day.

SkyCool
Headquartered in Sydney, Australia, SkyCool has developed and patented a...