For over 50 years, Blast Deflectors, Inc. (BDI) has provided airports, airlines and aircraft maintenance companies with cutting-edge solutions for jet-blast and ground run-up noise problems. Its deep understanding of the aerodynamic and acoustic theories of this field combined with its real-world experience from thousands of jet-blast deflector installations and more than 35 completed ground run-up enclosures makes BDI unique.

By focusing exclusively on jet-blast and run-up noise, BDI has earned a reputation for expertise, integrity, and long-term customer commitment. Its range of jet-blast screens, jet-blast fences and jet-blast deflectors (JBD) along with its ground run-up enclosure technology allows airports, designers, planners and consultants to improve the safety and environment of airports and the communities that surround them.

Since the days of the first jet airliners, BDI has worked to address the jet-blast danger of maneuvering aircraft, which can create significant hazards for people, vehicles, aircraft and buildings on and near airports. Jet-blast from taxiing aircraft can be effectively controlled using an adequately designed jet-blast deflector, screen or fence. BDI offers a range of solutions designed specifically to create a safer environment at airports.

BDI’s jet-blast deflectors meet the specifications of aviation authorities worldwide and have been installed in over 58 countries. BDI’s deflectors can be shipped anywhere in the world and are used by airports as a tool to create usable space in areas that would otherwise be unusable due to jet-blast hazards.

BDI studies the aircraft mix, available space, required protection, aesthetic requirements and portability requirements for each project to identify which of its range of over 45 models is most suitable. With heights ranging from 1.82m (6ft) to 11m (36ft), configurations include:

Aircraft maintenance procedures often require running engines at high-power settings. These tests allow technicians to monitor power plant performance and to conduct engine manufacturers’ prescribed test sequences. This type of testing is called a ground run-up. Ground run-ups are performed at idle, partial power and takeoff / full power. Ground run-ups can last from a few minutes up to, in some instances, more than 45 minutes.

The jet-blast from an aircraft engine running at high power can create hazardous conditions for a considerable distance behind the aircraft. For example, a B777-300ER running at takeoff power produces a jet-blast envelope that exceeds FAA guidelines for safety for more than 609m (2,000ft) behind the engine.

The most practical treatment to address this issue is a blast deflector rated for full-power jet-blast velocities. BDI offers a range of blast deflectors designed specifically for aircraft run-ups. Standard models include deflectors rated for takeoff power for the following aircraft classifications:

It is critical that maintenance operations perform ground run-ups as needed without restrictions so that revenue-generating schedules can be maintained. Since ground run-ups are typically performed at night when aircraft are out of service and available for maintenance, run-up noise can be a challenging issue for airports. Depending on the aircraft and engine type, run-up noise can be heard for a considerable distance around airports.

If run-up noise is an issue, a ground run-up enclosure (GRE) may be an ideal solution. A GRE is a facility designed to minimise the acoustic impact ground run-ups have on communities surrounding airports. Additionally, a GRE protects the immediate surroundings from hazardous high-velocity jet exhaust.

BDI pioneered the field of GRE facilities and have patented technologies that increase both the usability and noise reduction of their state-of-the-art run-up enclosures. BDI has built run-up enclosures to accommodate all types of aircraft, from small general aviation aircraft up to the A380 and the B777, in countries across the globe.

Blast Deflectors, Inc. (BDI) has completed the installation of its first jet blast deflector in Argentina at Ezeiza International Airport. 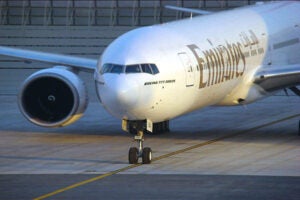 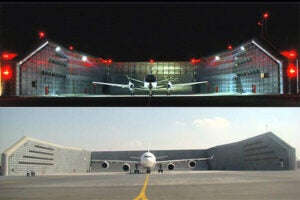 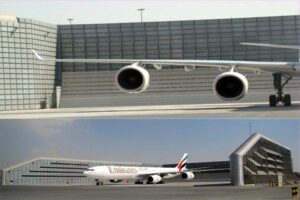 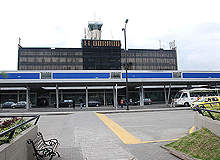 El Dorado International Airport is one of the top 100 busiest airports in the world. It is located 15km west of the city centre of Bogota in Colombia, South America.

Blast Deflectors, Inc. (BDI) has completed the installation of its first jet blast deflector in Argentina at Ezeiza International Airport.

Addressing airport noise is a challenge all airport authorities face, and the Wayne County Airport Authority has taken this challenge head on by constructing a ground run-up enclosure (GRE) at Detroit Metro Airport to minimise the acoustic impact of engine run-ups.

Blast Deflectors (BDI) completed the construction of a state-of-the-art engine testing enclosure at the James A. Richardson International Airport in January of 2012.

Blast Deflectors (BDI) recently announced the completion of an engine test facility at Zurich International Airport, Switzerland. The facility, which consists of three acoustic walls and a jet blast deflector, can accommodate aircraft up to ICAO Code C and is the first installation of BDI technology in Switzerland.

Blast Deflectors (BDI) recently completed construction of a ground run-up enclosure at Vancouver International Airport, Canada. The facility, which will be used primarily for the testing of turboprop aircraft is the first of its kind in Canada.

Blast Deflectors has released a fictional Christmas story to highlight the benefits of its GRE technology and new modelling department, which allows the company to create a 3D construction model for each project.

Take a Walk on the Quiet Side of Bangkok

Bangkok, Thailand is home to the world's tallest air traffic control tower, the largest commercial aircraft hangar and, as of June 2011, the world's largest ground run-up enclosure (GRE). The 11,000m² facility, constructed at the Subarnabhumi International Airport in Bangkok for Ai

Noisy open field run-ups have come to an end at the Bogotá International Airport with the completion of the first ground run-up enclosure in South America. The three-sided enclosure, designed and built by Blast Deflectors of Reno, Nevada (US) was constructed as part of the new ma

Blast Deflectors, Inc. (BDI), recently completed construction of a ground run-up enclosure (GRE) for FedEx at the Memphis-Shelby County International Airport. The facility, which is used to minimize the acoustic impact of high power engine run-ups in the community surrounding the airport, is ad

What happens when the largest global aircraft manufacturer needs to safely perform engine runs in a compass calibration area that does not allow ferrous material? It utilises a unique all-aluminum jet blast deflector developed by Blast Deflectors Inc of Reno, Nevada. Founded in 1916 in

Blast Deflectors Inc, based in Reno, US, has finished constructing its first ground run-up enclosure (GRE) in the Middle East. The facility is part of the newly completed Emirates Engineering Centre on the north side of Dubai International Airport. The GRE, which is an acoustic enclosu

The Airbus A380 is the largest commercial aircraft in the world and it flies in and out of the Sydney International Airport every day. So how do you protect hangars and buildings that are adjacent to the engine test area from high-power engine runs and high-velocity exhaust from this massive airc