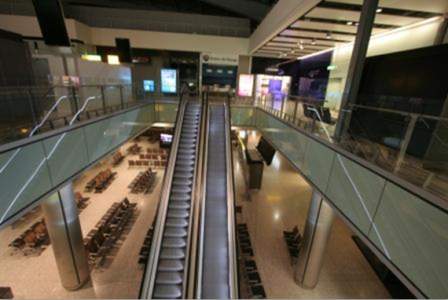 Escalator fitted with people sensors cut running times by over 75%.

A staggering 65 million passengers travelled through the doors of Heathrow Airport in 2010. Accommodating this many people, not to mention airport employees inevitably leads to significant demands on energy and utilities. With sustainability at the core of Heathrow’s vision, the airport is continually seeking new ways to reduce energy consumption across the campus.

In light of this, Firstco have been working with the operations team to identify new opportunities and to project manage a large number of energy demand reduction projects at the site. This has yielded annualised savings of well over £1m and significantly reduced Heathrow’s carbon dioxide emissions.

Some 50% of Heathrow’s consumption is estimated to be attributed to third parties, for example retail outlets in the terminals, aircraft consumption of fixed electrical ground power (FEGP) and pre-conditioned air (PCA), cargo and other tenants. Over such a large and diverse campus, Firstco was able to provide a much clearer picture of where the key target areas were.

By ensuring that each tenant space is correctly billed for its consumption (including the introduction of new smart metering), Firstco have facilitated the recovery of well over £2.5m of back-billing to third parties leading to an ongoing billing of £1.5m per annum. Other new technologies, such as Mesh Networks for the collection of metered data, were trialled during the assignment.

Steve Chambers engineering director at BAA commented: "Energy reduction is very much an ongoing challenge and the Firstco team has provided us with intelligent groundwork from which we can push energy reduction even further towards our long term vision."

The Firstco-led team which was in place for around a year before handing over to a new in-house team found this a fascinating project. It has exposed Firstco to a new side of Heathrow and has also opened up more opportunities to help clients reduce energy consumption and costs, which are sometimes considered to be competing pressures in the capital and operations worlds. The work showed that a win-win solution is achievable.