Portec began a new era in baggage handling technology in 1957 and 1958 when they introduced the first Belt Power Curve and first Spiral Curve®. Used in more than 500 airports and with over 70,000 in service, the Portec positive chain / belt drive specialty conveyors have built a reputation for rugged dependability.

Portec has almost 50 years’ experience engineering baggage handling conveyors using chain / belt technology. The belt is driven by its outside edge by the precision belt drive chain. This low-tension, positive-drive arrangement is unaffected by changes in loading, belt tension, temperature, humidity, and foreign material getting between the bottom of the belt and the end rolls.

The low-tension Portec chain / belt system is very conducive to using mechanical belt lacing, because concerns of damage to the end roll lagging are non-existent. Even in difficult access areas of a conveyor system, mechanical lacing allows for fast and efficient belt changes. Unlike conveyors that use vulcanized endless belts, extensive disassembly of the conveyor is not required. In the event of belt damage, only the damaged section needs to be replaced.

Portec Belt Power Curves have strong all-steel frames built from 3.42mm steel for the most rugged operating conditions in an airport baggage system. The design is strong enough that most jams caused by soft-sided luggage will not damage the Portec conveyor or conveyor belt. The Portec high-precision sidebow chain and guide system meets industry noise requirements at speeds up to 4m/s. The Portec reputation is for low-cost ownership and rugged reliability.

Angle merge conveyors often represent one of the most maintenance-intense components of an airport baggage handling system. The Portec Angle-Flo is available in an airbar version with spring belt tension control that is capable of continuous 4m/s belt speeds with no heat build-up in the angle bar and no more maintenance requirements than a standard straight belt conveyor.

In very rugged or critical applications, the Angle-Flo with airbar is the choice. For applications at somewhat slower speeds or intermittent operation, the Angle-Flo-XA uses an airless angle bar and Portec’s spring belt tension system.

Oversize or late arrival baggage are some of the applications for Portec’s ChuteMaster fiberglass spiral chute. Portec uses the highest quality hand-laid fiberglass process instead of the cheaper chopper-gun system. Standard 90° chute components are available in several diameters. Specially designed round-bottom profiles help control the descending speed of the baggage. There are even multiple-entry modules that allow entry at several levels into a common spiral chute.

The Queue-Flo uses Portec’s chain / belt technology to both track the belt and power a short-wide belt conveyor. The positive-drive Queue-Flo eliminates end roll spin that is common in more traditional friction-drive belt conveyors and the maintenance problems associated with urethane tracking beads or bottom V-guides.

There are any number of conveyor belt fabrication companies that claim to provide replacement belts for Portec curves that are just as good as genuine Portec belts. Don't believe the hype. The main attraction of these imitators is low price and one of the truest statements ever crafted 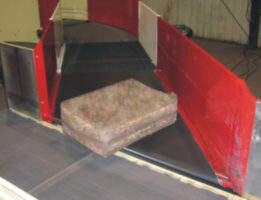 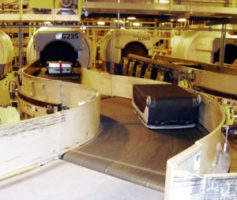 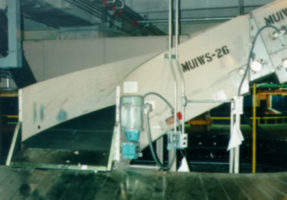 Portec and Pert Engineering have announced the formation of a joint venture, Portec Asia, in order to better serve the needs of customers in China and the Asia-Pacific Region. Portec Asia, which is headquartered in Hong Kong, will be responsible for all sales, marketing and service activities to

Portec has announced the appointment of Dominic D "Don" Cuzzocrea as president and chief executive officer effective immediately. As the president and CEO of Portec, Cuzzocrea will be responsible for all corporate operations. During his career with Saleen, Trim Systems and Starcraft, C

There are any number of conveyor belt fabrication companies that claim to provide replacement belts for Portec curves that are just as good as genuine Portec belts. Don't believe the hype. The main attraction of these imitators is low price and one of the truest statements ever crafted

Portec Equipment is No Louder than Conversation

In the material handling industry, Portec equipment is known for strength and reliability. Now, it will also be known for quiet operation. Recent testing by Engineering Dynamics of Englewood, Colorado verifies that Portec power belt curves generate sound levels less than a typical conversation. Read more

Portec introduces a new conveyor curve that changes the face of high speed baggage conveying. The development of ultra high-speed conveying has been limited by the inability of current conveyor curve designs to operate at ultra high speeds. A 3km inter-terminal baggage transfer operating at 2m/s