Rising fuel costs come at a time when travellers have become increasingly price-sensitive, owing to rising living costs and growing inflation rates. This could jeopardise the recovery of airlines. One way of keeping costs down would be to consider more fuel-efficient aircraft, with fleet transformation already underway for many companies.

According to GlobalData’s Q3 2021 Consumer Survey, when asked, “Which factors help you decide where to go on holiday?” approximately 58% of respondents stated that they consider “Affordability” when deciding where to go on a vacation. This means that if airfares rise, a significant number of travellers could be deterred from travelling.

Another GlobalData survey from Q4 2021 shows the increased concerns over personal financial situations. When asked “How concerned are you about your personal financial situation,” approximately 30% of global respondents said that they are “extremely concerned” while a total of 54% of respondents said that they are “slightly” or “quite” concerned about it. This demonstrates that financial concerns have persisted after the pandemic and will now be exacerbated by rising living costs and inflation. As a result, many travellers will be more sensitive towards price increases, which could create another bump on the road to recovery for airlines.

Rising fuel prices are a result of a variety of circumstances, including higher consumption during the pandemic and low energy reserves. Also, due to the sanctions imposed by several nations, the Russia-Ukraine conflict has resulted in a worldwide fuel crisis. The closure of these nations’ airspace has created a bottleneck path for many airlines, increasing operational expenses owing to rerouting. This conflict also resulted in a drop in fuel supply and an increased demand, which results in airlines’ operational costs increasing, with the additional cost then being passed on to the customer. 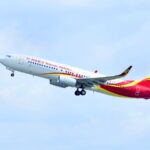 Many travel restrictions may be eliminated, but airlines must find a means to reduce operational expenses to keep ticket costs down. This can be done by companies expanding their fleet of fuel-efficient aircraft, which will help them to stay on top of rising fuel costs. Reduced operational expenses will result in lower airfares, which will inspire customer loyalty. For many airlines, investment in more fuel-efficient aircraft is already underway. In 2022, Boeing stated that international airlines have invested nearly $1 trillion in the last ten years to reduce carbon emissions and cut dependence on traditional fuel, which shows that the sector is moving in the right direction. With investment in more fuel-efficient aircraft underway, airlines will be able to reduce operational costs, which will result in lower ticket prices for travellers. However, this type of fleet transformation is at varying stages from airline to airline, meaning that factors such as rising fuel costs and inflation could hit some companies particularly hard in the short term.