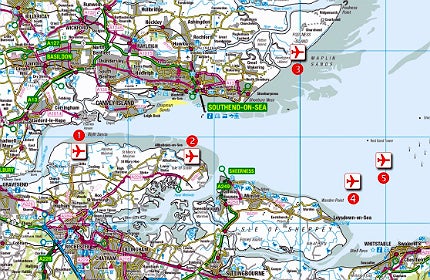 As the Greater London area continues to strain its airport capacity and with a third runway at Heathrow seemingly off the table, proposals for a brand new airport in the Thames Estuary have been filtering in for years.

The beginning of 2012 brought news that the UK Government was due to start a formal consultation on a £50bn airport in the Thames Estuary, as an alternative to an unpopular expansion at Heathrow.

Proposals for the Thames Estuary Airport, which has been championed by London Mayor Boris Johnson, have been put forward throughout 2012, in offshore locations including Shivering Sands, off the Isle of Sheppey and Foulness. The debate still continues as proposals continue to be made, while critics raise concerns over noise pollution and unworkable costs.

The US House of Representatives approved a bill to provide $63bn for programmes under the Federal Aviation Administration (FAA) up to 2015. The money will be used for major projects such as airport expansion and modernisation, air traffic control upgrades and increasing the use of unmanned drones in domestic airspace.

The bill is a testament to the importance of aviation to the US economy, and it is also intended to accelerate the transition from radar-based aircraft control to GPS-based navigation as part of the country's Next Generation (NextGen) air traffic modernisation programme.

The new system, which picked up speed during 2012, allows pilots and air traffic controllers much more detailed information on flight positions and routes, facilitating an expected 50% increase in air traffic during the next ten years.

India's economy has been rapidly developing, creating increased demand for both domestic and international flights in the country.

The astonishing growth of India's aviation industry will make it the third largest aviation market in the world by 2020, according to a report published in March by CAPA, the Centre for Aviation and SITA.

According to the report, more than 452 million passengers are expected to fly every year in India by 2020, fuelled by annual passenger traffic growth from 42 million to 150 million between 2000 and 2012. Particularly strong growth has been recorded in the low-cost sector of the industry, which now represents 70% of the country's aviation market.

As a result of the phenomenal growth of Indian aviation, the government is planning to invest $30bn in airport infrastructure during the next ten years to handle the burgeoning demand.

The investment will be put towards developing new airports and modernising or expanding existing facilities.

The Indian Government is expecting a second airport in Mumbai to begin operations in 2013, followed by new airport developments in Kolkata and Chennai. New airports in tier II and tier III cities are expected to ease the pressure on India's six main hub airports, which currently handle 70% of the country's air traffic.

Hartsfield-Jackson Atlanta International Airport, the US's main aviation hub and the busiest airport in the world by passenger volume, opened a new international terminal in May, developed at a total cost of $1.4bn. The terminal, called the Maynard H Jackson Jr International Terminal, separates arriving and departing passengers with different levels and introduces a new building with 12 international gates.

The new terminal features an enhanced baggage handling system to reduce processing times for passengers, and should allow the development of new routes and ease the pressure on the airport's other terminals. With a dedicated international terminal, Atlanta airport is also looking to complement its dominant domestic aviation business by claiming a larger slice of the international market. Atlanta's new terminal would be swiftly followed by the completion of the new, $2.4bn Terminal 3 building at McCarran International Airport in Las Vegas, US.

China plans to meet its own growing passenger demand by building an incredible 70 new airports by 2015, increasing the national total to more than 230. According to Civil Aviation Administration of China chief executive Li Jiaxiang, the government also plans to modernise and expand a further 100 airports in the same period.

The massive programme of construction and development will increase the number of Chinese travel destinations by 44%, with an estimated 450 million passengers expected to fly in China by 2015.

With passenger demand only likely to rise in the short-term future, the country needs to expand rapidly to ensure that this growth isn't curbed by capacity constraints.

The memorable London Olympics cast a long shadow over the UK's aviation industry this summer.

In July, the country's main aviation hub Heathrow Airport reported a major spike in passenger numbers passing through its terminals.

The airport processed a record number of passengers on 16 July, with 237,000 passengers compared to the average of 190,000 usually recorded at that time of year.

The airport employed thousands of extra staff with more than 20 languages between them to handle the surge in passengers, which included athletics fans from around the world as well as Olympic athletes, coaching staff and families.

UK airport operator and Heathrow owner BAA was finally forced to sell Stansted Airport by the Competition Commission (CC) in August, ending a long battle for the operator to maintain ownership of the airport.

The CC said that BAA's sale of Stansted would benefit airlines and passengers due to the increased competition from new ownership, while BAA argued that Stansted and Heathrow serve different markets.

And, after a near-miss at Ronald Reagan Washington National Airport, the US Federal Aviation Administration was forced to suspend opposite direction operations at all US airports. Three planes almost collided on the runway when two planes were cleared for take-off just as another was landing.

A busy month began with bad news for BAA, which reported that the early spike of the Olympic Games was undone by a drop in passenger traffic for August, as Britons stayed at home to watch the Games and potential visitors stayed away to miss the crowds in London.

The FAA started rolling out its NextGen programme in August, with the launch of the Metroplex initiative in Florida airspace. The system is designed to enhance approaches and descents at the state's airports.

The US's NextGen programme has an equivalent in Europe - the Single European Sky, which aims to modernise and harmonise ATC operations across the continent. As part of the initiative, UK air traffic services provider NATS announced it would lead a project to execute an "environmentally perfect" and efficient transatlantic flight.

Superstorm Sandy dominated aviation news in October and November, as the storm shutdown flight operations across the US East Coast. Thousands of flights were cancelled in the region, with airports in Newark, Philadelphia and New York the most severely affected.

Superstorm Sandy may have grounded close to 20,000 flights in New York, New Jersey and other states, but the airports were swift to react to the damage, returning to mainly normal operations by early November.

As the floods receded and repairs were carried out, the fallout of the storm began to become clear, with Heathrow Airport reporting that Sandy contributed significantly to a 0.1% passenger traffic decline in October.

December: FAA to begin NextGen flights at Portland Airport in 2013

FAA's NextGen initiative is on the brink of becoming reality for the US aviation market. In December the administration announced that it would begin NextGen-supported flights at Portland International Airport in Oregon from 2013.

The new flight system in Portland is reportedly laying the foundation for a wider rollout of the system, with NextGen initiative underway across the US, according to US Transportation Secretary Ray LaHood.