Expand
Schematic plan of Ronald Reagan Airport.
Interior of Ronald Reagan Airport.
The art wall in the National Hall of Ronald Reagan Airport's new terminal building.
Terminal B/C handles most of the airport's traffic and is a three-level glass structure.
Terminal B/C was constructed in 1997 at a cost of $25m including the addition of a new air traffic control tower.
The architect Cesar Pelli of Argentina designed the new terminal to reflect the beauty of the surrounding area.
In Ronald Reagan Washington National Airport, which is effectively a national showpiece, the architectural look of the installation is particularly important.
Terminal A was originally erected in the 1940s and the revamp is designed to restore much of the original quality.
Many original features including the staircases of Terminal A were renovated. 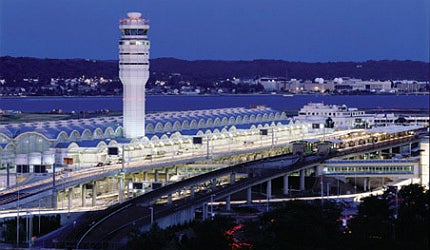 The airport is administered by Metropolitan Washington Airports Authority, who are responsible for Dulles airport as well. The airport accomodated a new record of 17.8 million passengers in 2005 (a recovery from the post 9/11 slump in passenger traffic).

The airport forms an important link in the local economy, providing more than 25,000 jobs in total. Washington DC is a relatively poor area so these jobs are of particular importance.

With the addition of more flight operations and the limited space in the aging main terminal the airport went through several renovation projects from 1996 to 2003 to increase its capacity.

Reagan National serves primarily as a ‘short-haul’ airport, offering non-stop service to destinations no further than 1,250 miles from DC (due to federal restrictions). The airport does, due to federal concession, offer limited non-stop, long-distance flights to Denver, Phoenix, Las Vegas, Seattle and LA.

Projects carried out at the former Washington National Airport

There have been two major projects at the national airport in recent years: the addition of a new terminal and the renovation of Terminal A (first built in 1941).

Terminal B/C handles most of the airport’s traffic and is a three-level glass structure with 35 gates and more than 60 shops. This was constructed in 1997 at a cost of $25m including the addition of a new control tower.

The total renovation and construction project cost an estimated $800m and the two teminals now boast a total floor space of 975,000ft².

Terminal B / C construction at the MWAA-run airport

Hangar 11 on the northern end of the airport was converted into an interim terminal for US Air and Delta Air Lines in 1989, freeing up several gates in the main terminal until the new terminal complex became operational in July 1997.

The new three-level terminal complex consists of Terminals B and C and two parking garages. The architect Cesar Pelli of Argentina designed the new terminal to reflect the beauty of the surrounding area and also to provide a functional space. The terminal houses 35 aircraft gates and ‘National Hall’, a main street for shops and eateries on the concourse level.

"The original waiting room was restored along with many other features such as staircases and the post office."

The interim terminal closed immediately after the opening and was converted back into a hangar. One pier of the main terminal (now Terminal A) was demolished, while the other pier remains operational today as gates 1–9.

The second major project is the renovation of Terminal A, which dated back to the foundation of the airport in 1941. Construction began in February 2002 and the project was completed by October 2003.

The original waiting room, with its views across the Potomac River to the National Mall were restored along with many other features such as staircases and the post office. There were also a series of new gate facilities and passenger service areas added.

Road infrastructure improvements at the US airport

Leo A Daly also managed a related vehicle and pedestrian circulation project while coordinating activities of more than 20 consultants. The company placed new elevated roadways and connected perpendicular terminal pedestrian walkways from the new terminal, through the landside Metro station, to the parking garage, creating a multi-modal facility.

Project work proceeded adjacent to ongoing airport operations without causing disruption. No flights were delayed or diverted because of construction.

Shalom Baranes was responsible for architecture and historic preservation. In an airport such as Ronald Reagan Washington National Airport, which is effectively a national showpiece, the architectural look of the installation is particularly important.

Terminal A was originally erected in the 1940s and the revamp is designed to restore much of the original quality to the building, not least by removing 1950s and 1970s additions.

The Ronald Reagan Washington National Airport, as well as the other airports in the Metropolitan and Washington Airport Authority (MWAA) raise most of their revenues through bond issues. The interest on these bonds is paid through a combination of fees and rent.