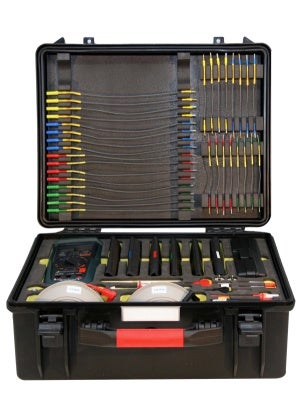 Red Box International has been manufacturing Ground Power equipment since 1994. Started by Allan Ross in a small workshop at his home, it has established itself as the go-to manufacturer of high-quality solid-state GPU’s. It is regularly chosen to provide bespoke power solutions to the military and associated equipment providers. A keen pilot himself, Allan was inspired to fly when he first took a trip in a bomber with his Grandfather at the age of four, and aviation has played a huge part in the development and history for Red Box as a company.

He was taught by Dickie Snell, who was a Class I Pilot in the RAF. Allan took his first solo trip at RAF Middle Wallop, where he gained excellent ground knowledge to his flying career. Years later, Allan was approached by Dickie’s son, Ian Snell, who had an idea for a business. The company was born, and the red tin box containing one of the units became the inspiration behind the company name. Allan started the business in a small workshop at his home in Michelmersh in 1993. Ian Harding was also involved as Technical Director at Red Box.

Red Box expanded its product range in 1998 by adding quality camera inspection kits for almost any space and situation. These systems are used by police and fire departments, as well as manufacturers such as Audi, Skoda, Volvo and Volkswagen. These are increasingly becoming staples for MROs in the aviation industry. These borescopes and fiberscopes allow access to areas of a plane or helicopter’s engine that would be previously have been unreachable without dismantling, saving time and money.

In 2006 Adrian Jackson took over as managing director. With his experience in sales, business development and marketing, he quickly set about expanding the Red Box range. Subsequently the company also introduced a range of pre-designed aviation tool solution kits into their product offering. These toolkits are used by many of the world’s leading airlines, MROs and military organisations, and Red Box can also offer individual tools, cabinets and engraving.

The next additions to the Red Box product range were the aircraft-moving tugs, which can move aircraft weighing over 15t. These were manufactured at the company’s offices in Georgia, USA. Early 2013, Red Box once again expanded its product range with the Cool-Space portable evaporative cooler, which uses water and forced air to cool an area by up to 28ºF, and can be used remotely without the need to connect to a hose. This proved particularly popular for continued use in event areas, equine facilities, factories and warehouses.

In April 2013, Red Box acquired Weld and Metalcraft, which specialises in sheet-metal work and intricate fabrication. The company has the ability to provide a complete design, prototype and production service. This has allowed the Red Box Group to manufacture aircraft-moving equipment in the UK. This means the company can provide better after-sales support for customers, with more readily available parts and maintenance, and drastically reduced lead times and freight costs.

Weld and Metalcraft offers services including design, engineering, prototyping, water-jet cutting, and welding. These services can be used in business and domestic applications, varying from producing the chassis and panelling for three stealth supercars, to one-of-a-kind household items such as a bespoke art deco mirror. With Red Box International now coming into its 20th year it is going from strength to strength.