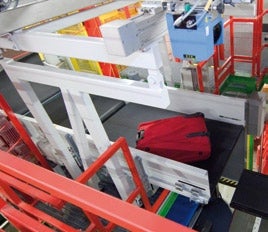 By 2015, Schiphol Airport in Amsterdam expects a transshipment volume of 70 million pieces of baggage. Reason enough, therefore, to deal with efficient solutions for baggage handling today. Grenzebach Automation shows how it is done – with loading robots controlled by laser measurement systems from SICK.

Whether business or economy class: At Schiphol Airport, in the future, passengers’ baggage will be loaded with first-class service in many cases, while they are heading for the departure gate. The devices making this possible are baggage-loading robots made by Grenzebach Automation based in Karlsruhe.

Installed on the conveyor belt and directly on the robot, measuring systems from SICK detect the volume data of the pieces of baggage that weigh up to 30kg, supplying the necessary information for automated loading of the baggage containers or carts and permit corresponding relief of airport staff.

Non-contact aptitude testing and optimisation of the loading pattern

The data of the laser-based measuring systems are indispensable for the operation of the baggage-loading robots. On the conveyor belt, each piece of baggage is measured already by two LMS laser measurement systems from SICK, which involves detection of both the position and orientation as well as length, width and height of the bags. Once the piece of baggage reaches the loading robot, that device has been aware of the contour data and orientation long beforehand, time, thus being able to position itself in the best possible way for transferring the bag to the implement attached to the robot.

An additional measurement taken besides the baggage contours is the current loading status. To this end, one uses an LMS laser measurement system installed directly on the robot arm. Based on the suitcase data and the current loading status, the software system developed by Grenzebach calculates the optimum position for depositing the piece of baggage and the robot’s corresponding sequence of movements.

At Schiphol Airport, the potential of automated baggage loading toward improving process sequences and working conditions has been recognized early on. In the context of the so-called ’70 MB’ programme, which stands for 70 million bags, May 2005 saw the installation and comprehensive testing in ongoing operations of a first pilot robot. After the first six months of operation, the test facility had already packed away 32,000 pieces of baggage weighing 531,000kg in 1,250 loading units. Accordingly, based on the experience gathered, the people at Schiphol Airport decided to cooperate with the Vanderlande Company as overall supplier and with Grenzebach in developing a terminal design that relies selectively on automated baggage loading.

For this purpose, among other things, an additional optimized robot cell was integrated into the existing baggage facility, which has been running in ongoing operations since May 2008. Meanwhile, the new baggage terminal is under construction, and by 2012, six baggage robots will be working there.

‘Bag to the future’ – the future of automated baggage loading has begun.