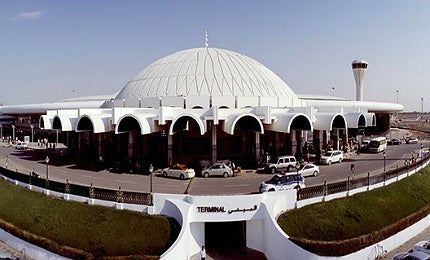 Sharjah International Airport (SIA, IATA: SHJ) is the main airport serving the city of Sharjah in the United Arab Emirates. It is located ten kilometres away from Sharjah City Centre and 15km away from Dubai. The airport was opened in 1977 and is owned by the Sharjah Airport Authority.

The airport currently serves as the main base for the low-cost carrier Air Arabia. It includes a 4,000m-long Category III runway (12/30) made of asphalt.

The airport also integrates a free zone which became operational in 1995. The Sharjah Airport International Free (SAIF) Zone is now a major business hub for more than 5,500 companies.

A major redevelopment and expansion was carried out at the airport from 2005 to 2009 with an investment of Dh227m ($61.8m). The project was primarily driven by the increasing passenger traffic owing to the success of Air Arabia, which was launched in 2003.

"The airport currently serves as the main base for the low-cost carrier Air Arabia. It includes a 4,000m-long Category III runway."

The number of aircraft tarmacs at the airport was increased, from 44 to 65. Capacity of the airport’s parking facility was expanded to accommodate 800 vehicles from the former 550 vehicles.

In 2010, plans to construct a second runway at the airport were announced. The new 4,060m runway will be constructed parallel to the existing runway. The distance between the two runways will be 250m.

The new runway project is currently in the planning stage and the tentative year announced for completion is 2015. An investment of Dh500m ($136m) is expected to be made in the project, which will be funded by Sharjah Islamic Bank.

The airport includes five cargo terminals spread across an area of 32,000 square metres. Terminal one is used for charter operations, terminal two is Lufthansa’s cargo hub, terminal three is for flight forwarders, terminal four is for customs and overflow imports and terminal five is for scheduled operations. The terminals feature separate cargo aircraft parking positions to handle nearly 16 types of aircraft.

The redevelopment and expansion project was financed by Abu Dhabi Commercial Bank (ADCB). GHD acted as the designers and consultants for the project. Projac provided project management services. Evaluation of the passenger traffic in the airport was carried out by Halcrow using simulation modelling. The common use self-service (CUSS) kiosks used at the airport were supplied by SITA.

Abu Dhabi International Airport, which is located in the emirate of Abu Dhabi, UAE, completed expansion projects in 2002.