Expand
The modernised Terminal 1 of Raleigh-Durham International Airport was opened in April.
The terminal was built using materials such as glass, steel, metal panels and translucent panels.
The concourse area of the modernised Terminal 1.
The airport's 11,000 capacity parking garage is situated between Terminals 1 and 2.
The opening date of Terminal 1 was changed from 2 March to 13 April due to inclement weather, which delayed the construction of the aircraft parking area. Image courtesy of the Raleigh-Durham Airport Authority. 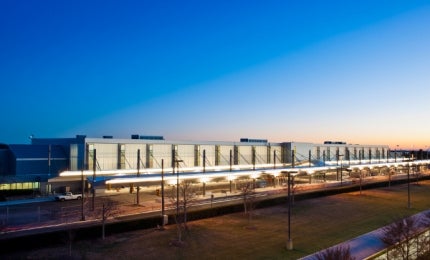 Raleigh-Durham International Airport (RDU) in Wake County, North Carolina, US, has had its modernised Terminal 1 opened, marking the end of several development projects at the facility over a 20-year period.

Opened in April, the 166,000ft² terminal is designed to handle three million passengers a year. It was built with an investment of $68m, including an expenditure of $750,000 for the terminal artworks alone.

The design highlight of the project is the replacement of the old terminal’s renowned blue panels, which gave it the name ‘Blue Box’, with translucent and silver panels to correspond with the look of Terminal 2 and the airport’s parking garage.

"The airport was built with an investment of $68m, including an expenditure of $750,000 made for the terminal artworks alone."

The terminal modernisation project broke ground in July 2012 and involved approximately 350 construction workers and 37 subcontractors, including 24 based in North Carolina. The renovated terminal serves Southwest Airlines and its subsidiary AirTran Airways.

Terminal 1 was opened in 1982 as Terminal A and was expanded in 1990 with the inclusion of five new gates. In 2000, the terminal was linked to the parking garage via an underground pedestrian walkway and was further expanded in 2001 with five more gates. In 2011, Terminal A was renamed Terminal 1, during the opening of Terminal 2.

Using construction materials such as glass, steel, metal panels and translucent panels, the terminal was designed to admit maximum natural lighting within the public areas.

The terminal features nine narrow-body gates and a concourse area fitted with large floor-to-ceiling windows to provide a clear view of the airfield. The security checkpoint features four lanes and an expanded queuing area and is located on the second level of the terminal building.

A new exit corridor enables commuting from any of the gates to the baggage claim area within minutes. A canopy has also been installed over the pick-up and drop-off area in front of the terminal to provide shelter.

The Cincinnati / Northern Kentucky International Airport (CVG) is located in Hebron, Kentucky in the US.

The ceilings with skylights, walls and columns provide more open spaces and the gate areas are installed with modern seats featuring USB outlets for electronic devices.

Three original works of art, Martin Donlin’s ‘Metamorphosis’, Catherine Widgery’s ‘Ripples’ and Gordon Huether’s ‘Highwire Travelers’, are incorporated into the terminal design. The legendary mosaic marking man’s years of early flight has now been integrated into the new terminal’s dedication plague, after being moved from the lobby of the airport’s first terminal.

Contractors involved in the modernisation

Pearce Brinkley Cease + Lee (PBC+L) was the architect for the project, while the general contractor was the joint venture (JV) of D H Griffin-Balfour Beatty Construction.

Precision Walls was contracted to frame the exterior and interior walls, install Trespa wall panels in the office areas, and fix the acoustical metal pan ceilings. The restaurant operations at the terminal are overseen by Anton-JQ RDU JV and Wi-Fi services throughout the airport are managed and operated by Boingo.

The airport is located in Wake County, North Carolina, US, approximately 18km north-west of Raleigh and 17km south-east of Durham. It handled 9.2 million passengers and 76,740t of cargo a day in 2013. The airport is owned and operated by Raleigh-Durham Airport Authority Board.

The airport covers an area of 5,000 acres (2,023ha) and features three runways, two terminals, an air traffic control tower that opened in 1987, a 11,000-space parking garage located between the two terminals and an observation park.