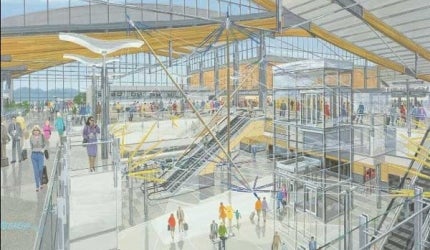 Raleigh-Durham International Airport is becoming one of the most important airports in the south-eastern US due to new businesses locating to the area – one example is the biotech industry with at least three big pharmaceutical companies having plants in the ‘triangle’. The airport therefore is becoming important as a business hub in the area.

In 2006, the Raleigh-Durham Airport Authority started construction on a major redevelopment of terminal C (first built in 1987), which was replaced with terminal two following the purchase of the terminal C lease by the airport from American Airlines in 2002 (this marked the start of the plan, which was subsequently announced in December 2003).

Completion of the $570m project added a new terminal that is three times the size of the old one at 900,000ft² (84,000m²) with larger check-in, security checkpoint and baggage claim areas, as well as new restaurants and retail concourse. This is the first terminal in the US to operate under ‘common use’, which means that airlines do not have dedicated gates as they are used to, and the gates they use change according to day-to-day airport operations.

The new terminal building can accommodate up to 13m passengers a year. The airport witnessed passenger traffic of 9.22m in 2012. There are also long-term plans to link the new terminal to the proposed Triangle Transit Authority commuter rail system.

The first phase of the new terminal (new north concourse and processor building) and features 19 gates, and 24 shops and restaurants. Two ticketing islands and a federal inspection area were also built in the first phase.

The terminal building was designed specifically to make an architectural statement and features a curved roof line, laminated wood (the largest glue-laminated wooden truss system for a roof in the US), steel cables and steel beams.

The architect, Fentress Bradburn, was asked to design the terminal to reflect the rolling hills of North Carolina (this is reflected in the curves of the roof). The engineering and structural design for the roof design was carried out by Stewart Engineering Solutions in conjunction with Arup in New York City.

The roof of the terminal has a hybrid structural system consisting of long-span trusses constructed of glue-laminated timber with steel sections. It is a combination of glue laminate, wood, steel, cables and long spans supported by tension cables extending down to the roof from a steel mast above the roof (15t of structural steel used).

"Raleigh-Durham’s new terminal 2 phase one is being used by several new airlines."

There are also moving walkways to transport passengers along the concourse, featuring large glass windows offering a panoramic view of the airfield.

The new terminal 2 phase one is being used by several new airlines including American, American Eagle, Delta, United, Air Canada and Midwest Connect. The second phase, opened in January 2011 (new south concourse), enabled the relocation of US Airways, Northwest and Continental from terminal A to terminal two. Terminal A was renamed as terminal one in October 2008 and houses low-cost carriers such as AirTran, JetBlue, ExpressJet and Southwest.