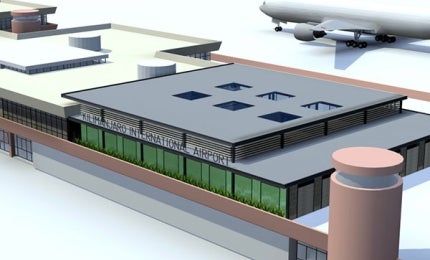 Kilimanjaro International Airport (KIA) is located between the cities of Moshi and Arusha in northern Tanzania.

Also known as the ‘Gateway to Africa’s Wildlife Heritage’, it is the first privatised international airport in Africa and is operated by Kilimanjaro Airports Development Company (KADCO), which is fully owned by the Government of Tanzania. The airport received the Routes Africa Marketing Award in 2013 and 2014.

Major airlines operating from the airport include Royal Dutch Airlines, Qatar Airways, Fly Dubai, Turkish Airlines and Kenya Airways.The airport was built in 11,000ha and was officially opened in 1971. Its old terminal was designed to handle 200,000 passengers a year, but was expanded to handle approximately one million passengers a year.

In 2015, the airport authorities announced a rehabilitation and extension programme to accommodate the increasing traffic at the airport.

The rehabilitation and extension project was awarded to Netherlands-based construction company BAM International in March 2015. The €37m ($40m) contract includes design and construction of multiple facilities at the airport.

"The airport received the Routes Africa Marketing Award in 2013 and 2014."

It includes renovation of the old terminal building, construction of a new 1.1km-long parallel taxiway, expansion of the existing taxiways and apron, runway repairs, and drainage and sewage works. New airfield ground lighting and floodlights along the apron will be installed as part of the expansion.

The renovated terminal building will feature modern restaurants and passengers’ waiting lounge. The entire project is scheduled for completion in 2017.

Financing for the renovation project

The Dutch Government granted €15m ($16m) for the project through the Facility for Infrastructure Development (ORIO) programme. The remaining amount will be arranged by the Government of Tanzania through commercial financing.

KIA’s terminal facilities are designed to save time for the passengers moving from arrival halls and departure lounges to parking areas and vice-versa.

The terminal building features check-in areas located in a spacious hall with well-marked check-in desks. The departure halls at the terminal feature restaurants, coffee shops, a bar and a variety of retail outlets for gifts and souvenirs. Passengers are aided by a modern personal assistant and flight information display system.

The terminal features a baggage reclaim system with two conveyor belt systems within 200m from the apron, which will reduce the baggage waiting times.

The airport has a single runway, designated as Runway 09/27, which has a length of 3,600m and width of 45m. The runway is surfaced with tarmac and is capable of handling big commercial aircraft such as Boeing 747-400 series and Antonov 124.

Also known as Khwaja Rawash Airport, Kabul International Airport is located 16km away from Kabul, the capital city of Afghanistan..

The runway is equipped with Cat II ILS landing system, which enables landing even in poor weather conditions.

Other services offered by the company include load control and flight operations, executive aviation and logistics, aviation security, station management and representation, clearing and forwarding.

The maintenance facility at the airport is currently operated by Tanjet Centre, a fixed-base operator (FBO). Tanjet Centre provides logistic support to private jets and aircraft maintenance services to KIA.