Expand
Kabul international airport is one of the main airports in Afghanistan. Image courtesy of Carl Montgomery.
The airport also serves as an army base of US NATO forces.
The airport has a single runway, which is 3,500m long.
The southern part of the airport was handed over to the Afghanistan Government for civilian operations. 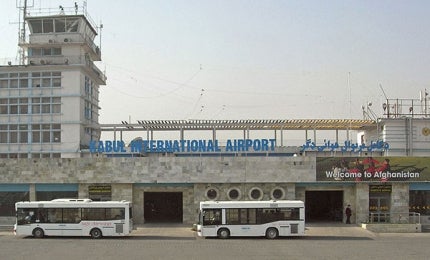 Also known as Khwaja Rawash Airport, Kabul International Airport is located 16km away from Kabul, the capital city of Afghanistan. It is the primary airport in the country and also serves as a military base with a capacity to house more than 100 aircraft. The airport is a hub for many Afghan airlines, including Ariana Afghan Airlines, Kam Airlines, Safi Airways and Pamir Airways. Other airlines that use the airport are Air India, East Horizon Airlines, Emirates, Silk way Airlines, Turkish Airlines and Spicejet.

"It is the primary airport in the country and also serves as a military base with a capacity to house more than 100 aircraft."

In July 2014, the airport was attacked by Taliban, who fired two rockets into the military wing. Three helicopters were damaged in the incident, including the president’s helicopter and two helicopters belonging to the Interior Ministry.

The airport has a new and an old passenger terminal, which handle international and domestic flights respectively. The new terminal can handle approximately one million passengers a year and was built between 2005 and 2009 with an investment of $35m from the Japanese Government.

The terminals are facilitated with free wireless internet access, a post office, a gym, a clinic and restaurants.

The Afghan Ministry of Transport and Aviation signed a contract with Japan’s ambassador for the reconstruction of the airport in 2012. The $20m project includes terminal expansion, security tower renovation and construction of additional entrance gates. The renovations are aimed at increasing the passenger handling capacity at the airport by 7%. The project is being funded by the Japanese Government.

A project for strengthening security at the airport was initiated by the Ministry of Foreign Affairs of the Islamic Republic of Afghanistan in February 2014. The scope of the project includes improving the security system at the international terminal with the installation of new X-ray machines and metal detectors.

It also includes providing buses and facilitating security checks to get rid of congestion at the airport. The project will be funded with $43m by the Japanese Governement.

The old baggage handling systems at international terminal were disassembled and replaced with new systems in July 2007. The contract for the installation of a new baggage run-out, a sorting line and new baggage weighing scales was awarded to Hukom.

The airport is connected to the city by a four-lane highway. Buses, taxis and private cars are available between the airport and the city.