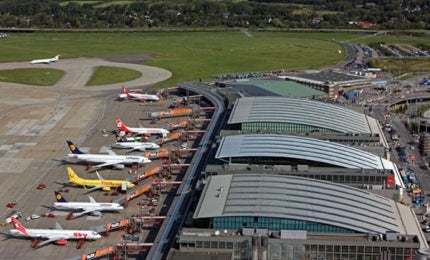 Hamburg International Airport is located 8.5km north-west of the centre of Hamburg, Germany’s second biggest city. The airport is more than 100 years old and is spread over an area of 579ha. It is owned and operated by the Hamburg Airport Administration Authority (Flughafen Hamburg).

It is the fifth largest airport in Germany in terms of passenger traffic. It handled 13.5 million passengers and 143,802 flight movements in 2013. It won the ‘Best Airport Europe’ award from the Airport Council International Europe in 2013.

Hamburg Airport embarked upon its biggest expansion and modernisation programme named HAM 21 in 2000. The Hamburg Airport Administration Authority invested €350m on the expansion.

"It is the fifth largest airport in Germany in terms of passenger traffic."

The HAM 21 expansion involved the construction of a new office building for the airport authority, a rental car centre with 800 parking spaces, southern extension of the passenger pier, demolition of the old Terminal 2 and construction of Terminal 1, a new noise protection hangar, new airport parking guidance system, northern access roads and a multi-storey car parking (P2). The first phase of HAM21 expansion was completed in 2004.

The airport authorities started individual construction projects after the completion of the HAM 21 project. Runway 05/23 was completely renewed at its south eastern end with an investment of €5.6m and was completed in 2013. The runway was extended to 285m in length and 40m in width.

In March 2014, construction started on a new air cargo centre named the Hamburg Airport Cargo Center (HACC), which will replace the existing cargo centre. The new HACC will have office buildings in an area of 6,000m², while 20,000m² of area will be assigned to logistics operations. It will also have 40 loading ramps and 36 parking positions and will be directly connected to the airport’s apron. With an investment of €45m, the project is expected to be ready by 2015.

The airport has two terminals, named Terminal 1 (T1) and Terminal 2 (T2), which have a combined capacity of 15 million passengers a year. The T1 started operations in 2005, has a floor area of 59,357m² and is one-third bigger than the T2.

The T1 has seven floors with an office space of 6,396m², retail and service area of 1,496m², and catering area of 1,000m². The terminal has 58 check-in counters, 11 shops and restaurants, and 26 tour operators and serves approximately 45 airlines. It also has a 1.6km-long baggage conveyor belt, which can handle 6,000 suitcases an hour.

Oslo Airport’s Terminal 2 in Norway will increase the passenger handling capacity of the airport to 28 million travellers a year.

The terminal uses eco-friendly and energy saving technologies such as rainwater usage system and thermal labyrinth. All the water used for the sanitary facilities in the terminal is supplied by an energy-saving rainwater usage system. The rain water which is collected from the terminal roof is filtered and stored in the rainwater reservoir located on the lower ground floor. The measures help the airport save 6.5 million litres of drinking water per year.

A thermal labyrinth uses geothermal energy and regulates the temperature inside the building. It reduces the load on the air-conditioning systems and therefore helps in reducing the annual CO2 emissions by 400t.

The T2 was constructed prior to Terminal 1 in 1993. The terminal building has a floor area of 5,850m² and was designed by Gerkan Marg & Partner. The sweeping roof of the terminal mimics wings of a plane taking-off. The T2 has 50 check-in counters, 11 shops and restaurants, two tour operators, a baggage handling system and ticket counters.

Details of the Airport Plaza at Hamburg Airport

The Airport Plaza is located between Terminals 1 and 2 and houses the central security facilities. It has 16 aviation security checkpoints, which lead to departure gates. All the passengers go through these checkpoints to reach the departure gates. The plaza also has a 2,630m² catering area, retail outlets in a floor space of 4,450m² and a number of branded stores.

The Hamburg airport has two runways; Runway 15/33 and Runway 05/23, which was renewed in 2013. The airport has three aprons for passenger and cargo aircraft. Apron 1, which is spread over 32ha, handles majority of the aircraft. The three aprons together have 60 aircraft parking spaces.

The airport has seven car parks, which include P1, P1, P2, P4 and P5 located close to the terminals and inside the airport, as well as P8 and P9, which are off-airport car parks located a bit far from the airport at Weg Beim Jager.

The car parks provide more than 12,000 parking spaces. An intelligent parking guidance system guides the motorists to the closest free parking space available thus helping them to save time.