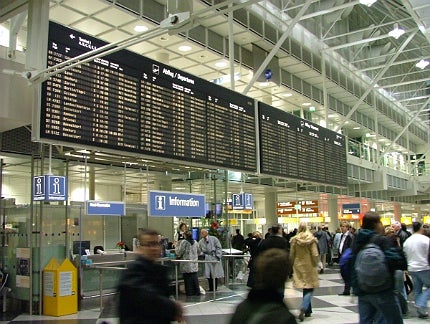 The extraction and use of passenger data by airports and airlines is a hotly debated issue. As the aviation industry considers the possibility of "risk-based" passenger screenings – meaning that travellers considered to be a security threat will be screened more rigorously than trusted travellers – the discussion about how passenger data will be used to make these categorical assessments is ongoing.

The International Air Transport Association (IATA) has stated that more than three billion passengers will travel by air in 2013 and predicts that this number will double again by 2030. Airports need to attract passengers to their facility, but also optimise the passenger check-in and security processes – to improve both passenger flow and their experience.

According to the head of the aviation practice for Unisys Asia Pacific Sury Chavali: "To remain competitive, airports – often in cooperation with airlines – are developing and testing innovative ways to offer personalised services for air travellers and automate processes for faster passenger flow through the airport."

"While it is generally accepted that government agencies use passenger data for border control within airports, there is likely to be sensitivity when such data is used for other purposes," said Chavali.

"Airports need to attract passengers to their facility, but also optimise the passenger check-in and security processes."

A new way of using apps to speed up passenger experience and increase revenue into the airport recently trialled by Gatwick airport, in partnership with Human Recognition Systems (HRS), shows the value of passenger data beyond security.

According to HRS the trial was set up to illustrate the "art of the possible" in terms of personalising and improving a traveller’s journey through the airport, and was described by Jim Slevin, HRS’s Aviation Business Unit manager, as "an attainable tailored passenger experience".

It works by identifying a passenger via a biometric system at the airport’s car park barrier. What follows is a unique passenger-tailored experience that sees the app guide the individual through the airport. Personalised information includes details of the correct check-in desk and customer-specific retail offers.

The introduction of biometric-based systems is becoming more and more common around the world – and not just at airports, for example, NEC’s facial recognition technology was implemented at Japan’s Universal Studios and cut operating costs by 30% – but biometric self-boarding, requiring partnerships to be made between airlines and airports, is a new direction for air travel that has recently been trialled by South African Airways (SAA) and Heathrow airport.

When passengers reach the ‘self-boarding’ gate an infrared scan is taken of their face, which is then checked against the biometric data that was taken at the check-in stage. Once the two sets of data scans are successfully matched, the passenger is permitted to board. Under this new system, the identity of a passenger only needs to be checked once throughout the entire departure process.

"There is nowhere else on SAA’s network (or the world) that has trialled biometric self-boarding," said Miranda Lovegrove, SAA’s airport manager at Heathrow. "SAA are keen to trial new developments in technology and will be looking to trial self-tagging at the self-service kiosks in the near future."

With an air travel industry that is already operating on "razor-thin margins" – and with flights often operating at over capacity – Paul Alexander, CEO of customer insight and strategy business Beyond Analysis, believes that big data utilisation is the key for airlines to improve the experience of the traveller, master customer demand and optimise aircraft usage.

"According to HRS the trial was set up to illustrate the "art of the possible" in terms of personalising a traveller’s journey."

Airlines collect an extensive amount of passenger data – from historical bookings, payment information and check-in data to meal choices, car deals and seating preferences – and now systems that can unlock this data are available. A better understanding of its passengers can help an airline to reduce over-capacity of flights, increase understanding of its customers’ needs and offer intelligence regarding price sensitivity.

"Airlines can significantly improve their margin management by understanding which prices will work on each route," said Alexander. "Understanding the passenger mix for every flight will also make it much easier to predict the impact of fluctuating consumer confidence on individual routes, and plan accordingly."

Beyond Analysis recently carried out a large-scale data collection and analysis project with Flight Centre, using products Valve and CDNA (the former looks at the "frequency and value of engagement the customer has with the business", while the latter looks at the "distinct behaviours of the customer"), which enabled the company to better understand its customers’ buying and travel habits. This measurably improved the company’s sales and marketing activities.

Airports are traditionally not used for collecting and storing passenger data, as Peter Spurway, the vice president of corporate communications and airport experience, confirmed on behalf of Halifax Stanfield International Airport. "We don’t have access to individual passenger data," he explained. "We have general demographics through ASQ, for example, but we do not know if passenger X is coming to the airport on any given day."

"The introduction of biometric-based systems is becoming more and more common around the world."

In order to be used by airports, passenger data needs to be collected. He continued: "Unless passengers get to the point where they voluntarily provide this information, privacy concerns will prevent us from gathering and using it."

There are many airport apps currently in operation that already extract some passenger data in return for the promise of a faster, better airport experience. For the moment, Heathrow airport’s app focuses on maximising retail revenue and ensuring that passengers can shop regardless of how much time they have left before boarding.

It offers passengers specifically the opportunity to "reserve and collect" baby milk, as well as doing other advance shopping; in return it requires: name, postcode, mobile phone number, email address and postcode details, and the newsletter option is automatically ticked.

So are airports likely to increase efforts to obtain information regarding their passengers? Alexander believes that the consumer will happily hand over their data if they believe that there is value in doing so.

"But care needs to be used when referring to ‘hand over’," he warned. "It really means ‘access my data to unlock a service of some sort’ – for example, every time I go shopping at Waitrose I ‘hand over’ my credit card to release the self-scan handset which means I can scan my shopping and avoid all queues."

He added: "We use the mantra of ‘easy, confident, incentivised’ – I will happily participate if it’s easy to participate, I feel confident that the data I provide will only be used for the purpose stated and I am incentivised to provide the data because there is a clear benefit from doing so."

It is essential that as numbers of travellers increase, that airports can deal with passenger growth, improve passenger flow, maximise revenues and optimise flight capacity and resources. And if airlines and airports are going to embark on partnerships, such as the South African Airways and Heathrow airport self-boarding trial, then passengers will need to be reassured that their data is protected.

"It’s a balancing act," said Chavali. "Passengers want their journey through the airport to be fast and easy, but they will want to know that their personal data is secure, and only used for the purpose that they gave permission for it to be used. To gain public acceptance of these innovative initiatives, and reap the benefits, airports will need to show the steps they are taking to protect passengers’ personal data."

Warsaw Chopin: a masterclass in the value of social media and communication

Poland’s Warsaw Chopin Airport has built up one of the biggest airport Twitter feeds in the world, thanks to a highly focused and responsive social media strategy.