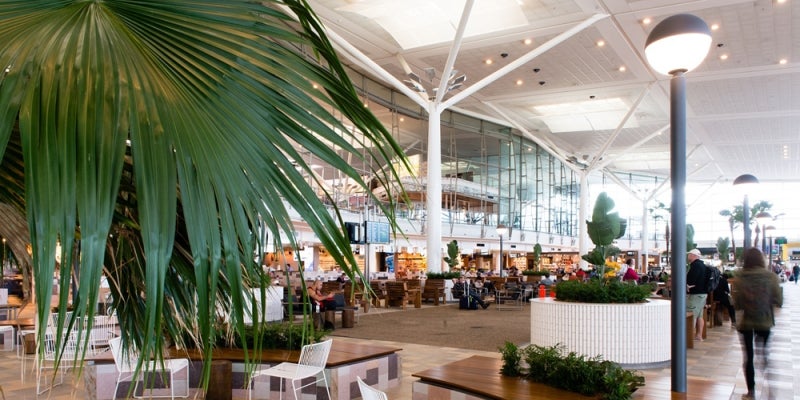 Initiated in February 2014, the terminal redevelopment project is one of the infrastructure upgrade projects launched by the Brisbane Airport Corporation (BAC) to facilitate the passenger growth at the airport.

The redevelopment marked a significant milestone in the terminal’s 20-year history and transformed it into one of the world’s most beautiful terminals, while also establishing it as a unique gateway to Queensland.

Brisbane Airport is getting ready for its biggest redevelopment and expansion project since its opening in 1988.

The project and other ongoing developments enable the airport to accommodate more passengers, offer more choice of routes and carriers, as well as greatly contribute to the region’s economy.

Handling 7.5 million passengers during the redevelopment phase, the terminal was kept operational throughout the construction period.

Design of the new international terminal at Brisbane Airport

The redevelopment was designed to offer a robust solution to facilitate the effective functioning of a variety of facilities in the terminal. It was aimed at creating infrastructure that would endure as a base-building rather than a fit-out.

The redevelopment retained the original design of the terminal, which features an iconic parasol roof, an artificial sky-like structure and a double-height, glazed wall. It brings together large central public spaces, walkthrough duty-free areas, and speciality retail and food and beverage outlets, which overlook the aviation activity on the aprons and runway.

The arrivals area features an artwork called ‘Sensory Hug’, which extends over the full length of the 750m concourse of level two, while the departures on level three features an artwork called ‘Keep the Sunshine’. Queensland artists were hired to provide the key art pieces and local materials such as stones, timber, fittings and plants were used to support the local suppliers.

The redevelopment has been awarded with the Queensland Property Council Award 2015 for excellence in design for demonstrating outstanding and creative design, material selection, social interface and innovation.

The project focused on redevelopment of the arrival and departure areas on levels two and three of the terminal building, as well as retail space expansion. It added approximately 4,600m² of floor space to the terminal.

The project was executed in two stages. Stage one included preparation of the terminal for the commencement of major reconfiguration works, while the second stage concentrated on redesigning levels two and three, adding more seating and relaxation spaces, retail stores and construction of the new JR duty-free walkthrough stores, which opened in September 2014.

"The redevelopment marked a significant milestone in the terminal’s 20-year history."

The terminal also features an informal seating arrangement known as Central Green and an Outdoor Room with elevated landscape and subtropical greenery.

The total investment for the project was $45m, which was fully financed by the Brisbane Airport Corporation as part of a $3.8bn infrastructure project being rolled out over a ten-year period.

Other ongoing developments at the terminal

A $16m project, which involved the construction of three new airline lounges on level four of the terminal, started in April 2015 and completed in 2016.

The expansion added approximately 2,090m² of new development space for three lounges and a day spa. Of the three lounges, two are for Air New Zealand and Singapore Airlines business travellers, while the third lounge is available for all travellers. The Day Spa is operated by Plaza Premium.

Two escalators and a lift connect level three departures to the new facilities on level four, which is a sterile area.