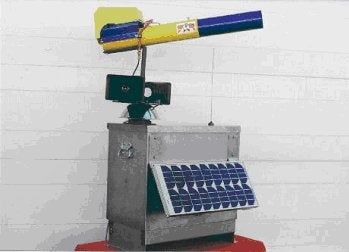 The Akwa Ibom International Airport, Nigeria, has deployed a cordless land air wildlife system (CLAWS), an anti-bird and wildlife technology system intended for checking the increasing threat of bird strikes and other wildlife intrusion into the airspace.

The device is capable of decreasing bird strikes and other wildlife hazard incidents by 80% in airspace, the company said.

The AIC Chairman, Air Commodore Idongesit Nkanga told allafrica.com that the bird strike and wildlife hazard issue had almost turned out to be a nightmare in the global aviation industry, including at the Ibom Airport.

The ASC representative Ankit Chudgar said the system will be installed through the extended runway and will be activated every 15 minutes before aircraft take-offs and landings in the airport to scare away any birds or wildlife.

CLAWS is equipped with ASC 3000 remote station, propane cannons, high-powered audio speakers on demand, firing features that allow formatting and a triggering system from within two miles of the base units antenna.

The system is equipped with a boom of the propane cannon and when triggered it belts out a frightening sounds from the stereo, scaring away any birds in the area.

The system is operated by setting up the self-contained and wireless working stations to be controlled along the runway and the system gets activated when the Control Hub receives a computer or the wireless hand-held transmitter(s) signal via the base antenna.

The information received by the Control Hub will be retransmitted to fire the selected individual or in group remote stations. It can be easily charged and can cover several acres of area through a single unit.