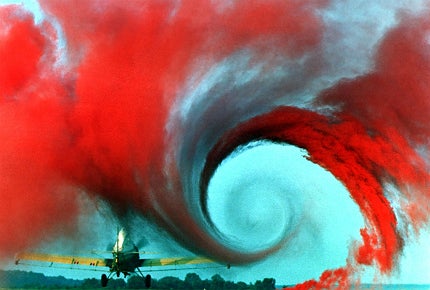 Wake vortices, or wing-tip vortices, are well-known to airports for their impact on safety. Wake turbulence is caused by the higher-pressure air on the underside of an aircraft’s wing mixing with the lower-pressure area on its upper side.

These wing-tip vortices can remain in the air for several minutes after a plane has passed, potentially causing heavy turbulence for aircraft following too closely behind.

Wake vortices are a particularly pressing concern around airport runways, where the close proximity of landing aircraft, along with nearby infrastructure and planes circling overhead, makes these powerful flurries of turbulence a major safety issue.

"The close proximity of landing aircraft makes these powerful flurries of turbulence a safety issue."

The effect of wake vortices on aircraft following behind – especially for medium and small aircraft following large jumbo jets – necessitates a minimum separation distance between planes, which limits airport capacity and is a major cause of flight delays.

In the US, for example, the Federal Aviation Administration (FAA) requires that landing small aircraft must be at least six miles behind a large plane, while two large jets must maintain a four-mile separation during landings, although continual improvements in knowledge have helped vary these distances according to circumstances.

Over the years, airports and the aerospace sector have conducted a number of research projects looking into wake vortices. The European Commission’s ATC-WAKE project, which ran from 2002 to 2005, worked to improve airport planning to allow airports to develop variable aircraft separation plans to shave off valuable minutes from the schedule.

The US’s National Aeronautics and Space Administration (Nasa) has been conducting test flights to study wing-tip vortices for decades.

More recently, wake vortex research has shifted towards the development of mathematical models to build a larger and more complex picture of vortices and their interaction with weather and atmospheric conditions. In fact, vortex modelling is playing a major part in the EU’s Single European Sky ATM Research programme (SESAR).

Up until now, research has, for the most part, been limited to better measurement and modelling of wake vortices, allowing airports to modify their strategies to make small reductions in aircraft separation. A new project being carried out by the German Aerospace Centre (Deutsches Zentrum für Luft-und Raumfahrt – DLR), however, promises a significant breakthrough in the management of runway turbulence with a physical solution that actually mitigates air flows themselves.

"To dissipate vortices in front of the runway more quickly, we have developed ‘Plate Line’, a system of parallel plates arranged one after another," Holzäpfel said. "Secondary vortices form on the approximately four-metre-long plates, which causes the primary wake turbulence to dissipate significantly faster."

During flight tests carried out in late April, the HALO research plane – a modified Gulfstream G550 – flew around 22 metres above the research team’s row of parallel plates, while the use of smoke and LIDAR laser measurement instruments allowed experts to confirm the weakening of wake vortices by the system.

The Plate Line system has also been designed to work hand-in-hand with a complementary wake vortex prediction and observation system, tested at Munich and Frankfurt airports, to reduce the risk of unforeseen wake turbulence conditions.

"The plates could allow up to twice as many commercial aircraft to land on runways."

The issue of wake vortices might seem a small fish in the ocean of airport operations, but DLR believes addressing this problem could influence major infrastructure decisions such as whether to expand with an additional runway. The humble plates developed by DLR could, the organisation believes, allow up to twice as many commercial aircraft to land on runways in good weather without compromising safety.

"The construction of new runways at existing airports is intrinsically linked with immense effort, even in the planning and decision-making phases," said DLR executive board chairman Johann-Dietrich Wörner. "Space is often scarce, and residential areas are affected by such an expansion. If it becomes possible to land aircraft with reduced separation between them while maintaining current levels of safety – thereby avoiding construction of additional runways through making more effective use of the existing facilities – then it is an advantage for both airports and the nearby communities. Research flights recently performed by DLR are an important step in this direction."

The next step for DLR’s project is to test the new system at a commercial airport, after which the size of the plates will be modified to deal with the stronger wake vortices generated by large passenger jets.

If all goes well and the Plate Line system has the effect that its developers expect, airports could potentially receive an unexpected boost in their efforts to tackle runway safety and capacity issues.