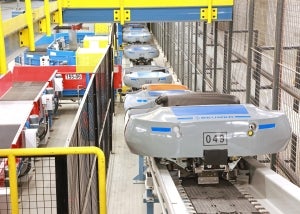 The contract was awarded by ALSTEF, the prime contractor for the renovation project, and also includes the integration of BEUMER Group’s Graphical User Interface (GUI), which will provide a graphical, real-time overview of the system. In addition to 100% automation and control of the BEUMER autover system, the BEUMER BeSS Software Suite will manage the storage of empty autoca DCVs and integrate with ALSTEF’s BAGWARE Sort Allocation Computer (SAC) software which will assign the destination for each autover DCV.

The integration, which is scheduled for completion in spring 2015, will be completed in two phases to enable the terminal to continue to operate normally and with minimal disruption throughout the installation.

Nice’s BEUMER autover system will comprise almost 150 individual, new-generation autoca. Each autoca will transport a single item of baggage to the airport’s Standard Three explosive-detection screening process and after screening discharging it into one of the nearly 60 destination outlets. Enabling each item of baggage to remain on the same autoca throughout each of these processes means that BEUMER autover increases track and trace, security, efficiency and system throughput.

The BEUMER autover system was selected for its ability to complement the objectives of the upgrade. These include a high level of redundancy and energy efficiency, combined with the flexibility and scalability to meet future increases in demand. Space requirements were also a big challenge but, with some of the industry’s smallest curve radii, the BEUMER autover system was able to meet the requirement for a very compact footprint.

As centralised maintenance was another important factor, the autover system includes a central maintenance area which will allow autoca to be repaired without impacting the 24-hour operation of the system.

BEUMER Group, with ALSTEF, has installed the autover system in a number of airports including Montreal Airport, which chose autover for its ability to provide high levels of security and flexibility. The autover was also chosen for Gdansk Airport, where it was installed in preparation for the UEFA Euro 2012 Football Championship.