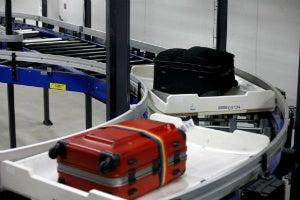 Under the new contract, Crisplant will replace the conveyor-based baggage handling system in YYC’s existing terminal building with a CrisBag tote-based baggage sorting system with integrated Standard 3 screening. The contract also includes an extension to the existing system, which will allow the CrisBag systems in the existing terminal and the airport’s new International Terminal to be linked, extending the 100% system-wide traceability for each item of baggage to both systems.

Crisplant was initially awarded a contract to install a CrisBag system in the new International Terminal as part of the Calgary Airport Authority’s International Facilities Project (IFP). Since that contract was awarded in 2011, Crisplant has worked extensively with the authority on the design and installation of the system, which is among the first, and largest, of its type in Canada.

The CrisBag system features unique start / stop technology, which allows sensor-controlled modules to power-on and power-off only when the totes are in operation. This, combined with a top speed of 10m/sec, makes CrisBag one of the fastest and most energy-efficient baggage-handling systems in the world.

In the final phase of the project, the CrisBag systems in the existing and international terminals will be linked via an inter-terminal baggage transfer connection. This will create a redundant system, allowing both baggage handling systems to be controlled from a single control room. The combined systems will provide Calgary International Airport with optimised manning and back-up security, in addition to offering passengers the flexibility of checking-in at either terminal.

Crisplant managing director Klaus Schäfer said: "System security and stability are our highest priorities. Every detail of this project has been planned meticulously to allow both phases of the project to be completed with no disruption to the normal operation of the airport."

The CrisBag system will provide an initial operational capacity of 8,000 bags per hour, inbound and outbound, when the new International Terminal at Calgary International Airport opens in Q4 2016. Planned expansion will further increase capacity to enable The Calgary Airport Authority to support anticipated passenger growth.

Work on replacing the conveyor-based baggage handling system in the existing terminal with a CrisBag system is scheduled to begin in Q4 2016, with completion and hand-over planned for 2018.