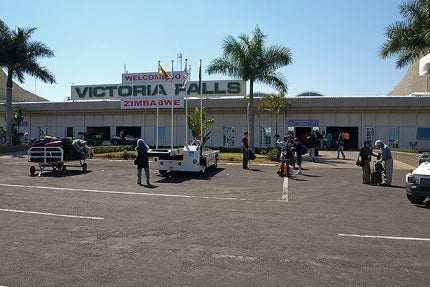 Victoria Falls International Airport (VFIA) is one of the main airports in Zimbabwe. The airport is located 18km away from the town of Victoria Falls and mainly serves the tourism industry, handling long distance flights from the Americas, Europe and Asia. VFIA is operated by the Civil Aviation Authority of Zimbabwe.

"The airport is located 18km away from the town of Victoria Falls and mainly serves the tourism industry."

The airport opened its new international terminal for passengers in December 2015.

Construction details of the VFIA expansion

Construction on the expansion project broke ground in April 2013 and was complete by November 2015.

The contract for construction of the new terminal and the second runway was awarded to China Jiangsu International, a Chinese company.

Sir Seretse Khama Airport (SSKA) is the major international airport serving Gaborone, the capital city of Botswana. It is located 15km north of the city, and is accessible through a passage off the Francistown road on the western bypass.

The land required for the new runway and terminal building was acquired, and four new bore wells were also drilled to augment water supplies for the project.

The airport currently has two terminal buildings. The facilities at the terminal include aircraft stands, check-in desks, gates and baggage claim belts.

It also has a VIP lounge, restaurants, bars and a duty-free and retail space. Other passenger features at the terminal include a tourist help desk, and first aid facilities.

The new runway has a length of 4,000m. It replaced the old runway, which currently serves as a taxiway.

The new runway can accommodate wide-body aircraft, such as Airbus A340, Boeing 777 and Boeing 747.

"VFIA is operated by the Civil Aviation Authority of Zimbabwe."

The airport’s cargo facilities include refrigerated storage, livestock handling, X-ray equipment, security for valuables, as well as trolleys and towing tugs. The airport is equipped with category six fire and rescue services.

Ground transportation and parking at VFIA

Numerous ground transportation facilities are available to and from Victoria Falls International Airport, including reliable taxi services and shuttle services from hotels to the airport. In addition, car rental companies Avis, Europcar, Budget, and Kanondo have offices inside the passenger terminal.