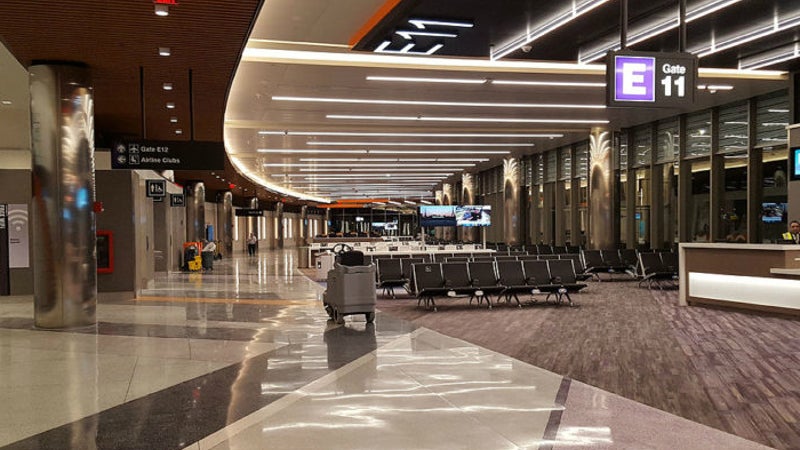 Terminal E of the Boston-Logan international airport has undergone a major refurbishment to accommodate the growing number of passengers at the airport.

The project is also a strategic investment for the airport authority, Massport, to meet its regional goals and attract new services to the state.

Sustainable and resilient design elements were incorporated in the terminal modernisation project, which has been submitted for LEED Gold certification.

Opened in mid-1970s, the Terminal E has the capacity to serve 1.4 million international passengers a year.

However, the terminal handled more than six million passengers in 2016, causing severe congestion that resulted in poor customer service, and inefficient operations at gates and associated ramp areas.

Passengers have been experiencing delays at the ticket counters and security screening areas over the years. Insufficient space after security checkpoints and a minimum delay of two hours during peak travel periods was also noted.

International traffic at the airport is projected to increase further by 2022. Massport proposed the modernisation project accommodate the current and forecasted growth.

Facilities and infrastructure added as part of Terminal E modernisation

The existing terminal area was expanded by adding approximately 95,000ft² of space, bringing the total area to 799,000ft². The expanded terminal now features three new gates with two-level jet bridges to expedite boarding processes. The gates can accommodate larger aircraft, such as the A380 and the 747-8.

Immigrations and customs area at the terminal’s west end was renovated. A new fourth level was added for a new airline, Airline Clubs, allowing its passengers to directly board the aircraft.

Technical upgrades included the installation of automated aircraft docking guidance systems (ADGS) and air ground support equipment (GSE). The GSE at the existing gates was also upgraded to accommodate a variety of aircraft.

The terminal now features newly designed seating with all the seats having power and USB charging facilities. New concessions and other supporting spaces were also added to the terminal.

Displays have been added to showcase innovations and art installations. A wall of fame featuring Nobel Prize winners from the state, news desks with local headlines and an interactive selfie moment podium have also been added.

"The existing terminal area was expanded by adding approximately 95,000ft² of space, bringing the total area to 799,000ft².”

Suffolk Construction was the general contractor for the project. The company sub-contracted Daniel Marr & Son for structural steel installation of the newly added space in the terminal.

High-definition laser scanning services were provided by Innovation Technology Partners, while JDC was contracted for building separation and demolition services.

Financing for the terminal modernisation

The entire project has been funded by Massport. In September 2014, the authority approved $30m for the terminal expansion. The total investment in the project has, however, not been disclosed.