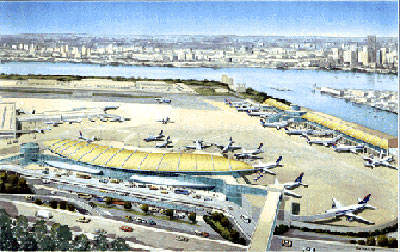 A map showing the positioning of Logan Airport and the four runways in Boston harbour. 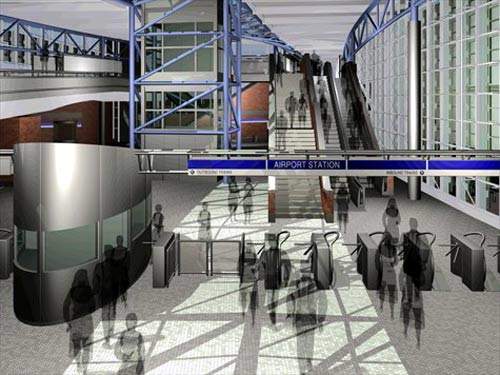 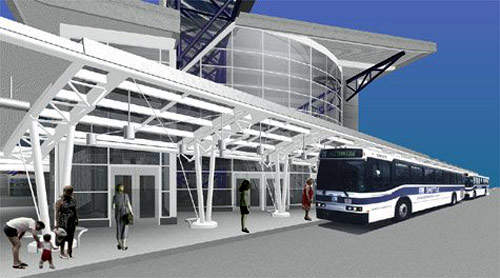 A new airport bus station was constructed to serve the Massport Blue Line services from East Boston to the airport. 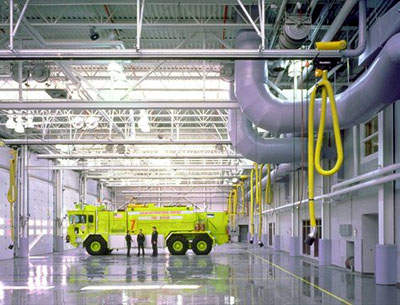 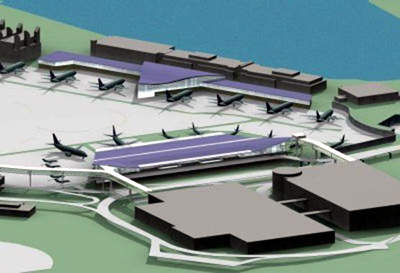 The newly modernised Logan Airport showing the connection between terminals and their relative positions. 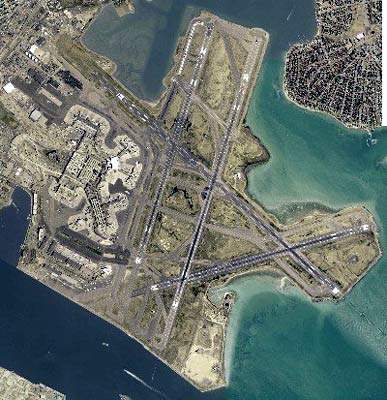 The runway arrangement at Boston Logan Airport, which is surrounded by water on three sides.

Boston Logan's new terminal was the first airport in the US to receive LEED certification for achieving environmentally significant standards.

Massachusetts is an important area for the airline industry with Boston Logan Airport being the 19th busiest airport in the world and a major hub in New England for both passengers and cargo.

The last major renovation at the airport was completed in 1977 and passenger numbers of 25.5m a year (2009) have far outstripped the capacity of the facilities since then (37m a year is projected for 2011). An upgrade and expansion programme has been underway at the airport since 1994 consisting of over 400 separate construction projects.

The airport is administered by the Massachusetts Port Authority (Massport) and they are responsible for the upgrade and expansion of the facilities. The total cost of the upgrade amounted to over $4.4bn when it was complete in 2005.

The project has been carried out alongside another major civil engineering urban highway project in Boston – the ‘Big Dig’ (costing $15.5bn) – which has seen major remodelling of the city’s central artery road and the Massachusetts turnpike (I-90) so that they can run in tunnels under North Boston and Boston Harbour eventually linking to the airport via the I-90/Logan Airport interchange.

One of the major considerations at Boston Logan has been the expansion and enhancement of its facilities without using any extra land outside its established area of 2,400 acres. There has been much controversy over the expansion of the 14/32 runway (central to enhancing the handling capacity of the airport) culminating in several lawsuits that were resolved allowing the runway to be completed in time for the 2005 completion date.

The many changes around the airport have required some reorganisation, and in February 2006, terminal D’s gates were renumbered and labelled as part of terminal C. During 2007, international terminal E is intended to be renamed terminal D.

One of the most important projects at the airport was the redevelopment of terminal A for Delta Airlines. This project cost $350m and the design was carried out by Landrum and Brown (planning) and Helmuth Obata and Kassabaum (HOK – architects) and the construction by the Canadian company Marshall Macklin and Monaghan.

“An upgrade and expansion programme started at Logan Airport in 1994.”

The design of the terminal incorporated 560,000ft² of floor space and included 22 gates (12 on the main terminal and ten on a satellite concourse connected to the main terminal by underground tunnels with moving walkways).

The existing terminal A buildings, or portions not required by the redevelopment, were demolished. This project was started in the first quarter of 2004 and was completed by March 2005. Delta only operates 11 of the 22 gates, having returned the remaining 11 to Massport due to financial difficulties. Continental Airlines was relocated to terminal A in November 2007.

The building is the first airport terminal in the United States to be LEED certified by the US Green Building Council. Among the building’s features are heat-reflecting roof and windows, low-flow taps and waterless urinals, self-dimming lights and storm water filtration. The 22 gates in terminal A increase the number of gates at Logan to 102.

Massport have also constructed a three-storey extension to the terminal B south building, which now serves as the Federal Immigration Services facility. This is due to the newly expanded Department of Homeland Security and the increased security staff numbers at the airport.

The new building was designed by Marshall Macklin and Monaghan and was constructed by Frederick R Harris Inc and Tishman Inc. The project was estimated to cost $50m. The construction was started early in 2004 and was completed by mid 2005.

The terminal E modernisation project was started in 2002 and was completed in three phases. Phase one included the reconstruction of the kerbside area with a road viaduct to allow a new access to level three. This has also included a weather-protected area and new bus facilities to transport passengers to aircraft not linked to a gate.

The second phase produced a new ‘international gateway’ for passengers arriving in the United States. This was done by enlarging the existing federal inspection facility, the arrivals area and the ticketing area to over 730,000ft². The new larger facilities have allowed over 2,000 passengers an hour to be processed through the federal inspection area (the area also incorporates an area for passengers to remove footwear for checking).

“An elevated walkways project was a major part of the Logan Airport modernisation programme.”

Phase three involved the construction of additional roadway viaducts from the second level of the departures area and also to connect terminals E and D. This work was started in 2003 and was completed in 2005. The cost of the three phases for terminal E was in excess of $221m. The construction work and civil engineering was carried out by Skidmore Owings and Merrill and Tishman Inc.

An elevated walkways project was a major part of the Logan Airport modernisation programme. This was one of the first projects instigated and was completed in November 2002.

The project involved the construction of climate-controlled passenger circulation bridges connecting terminals A and E to the central car park. The project also involved the replacement of the older lower clearance pedestrian bridges connecting terminals B and D with the central car park with new moving walkways and elevated walkways. The project cost $91m and was carried out by Cambridge Seven Associates.

In addition a new airport bus station was constructed to serve the Massport Blue Line services from East Boston to the airport. The new station was designed by Wallace Floyd Design Group.

The most important and controversial of the airside projects was the construction of the new 14/32 5,000ft commuter aircraft runway (this had been planned since 1973).

“The cost of the three phases for Logan’s terminal E was in excess of $221m.”

The new runway is unidirectional, with 32 used for landings and 14 for takeoffs. This design was adopted to redistribute more air traffic towards the open waters of Boston Harbour located to the southeast of the airfield.

Opposition to the construction of 14/32 had been fierce even among residents of nearby communities such as Winthrop and Revere, two areas which were supposed to benefit from a reduction in noise levels once the new runway opened up.

With construction completed, more wrangling has erupted over guidelines governing use of the new airstrip. Local communities are aggressively pushing for a minimum runway-use threshold of 11.5kt north-west winds, slightly higher than the 10kt threshold espoused by Massport.

The new runway reduces the need for the existing runway 15L-33R, which, at only 2,557ft (779m), is perhaps the shortest hard-surface runway at any major airport in the United States. In 1988, Massport proposed an 800ft (240m) extension to this airstrip (a project which would have required additional land fill along an important clam bed), but was stopped by court action. Massport has also had to commit to an extensive soundproofing programme and the limitation of night flights on this runway to conform to Federal Aviation Authority (FAA) rules.

The new runway has significantly reduced congestion at the airport by allowing 75,000 more flights each year, effectively doubling the number handled.

In April 2007, the FAA issued the go-ahead for the construction of a new centerfield taxiway to alleviate airfield congestion. The new taxiway was operational from July 2009. The 9,300ft (2,830m) taxiway is located directly between, and parallel to, runways 4R-22L and 4L-22R.

“There was much controversy over the expansion of Logan Airport’s 14/32 runway.”

This new centerfield taxiway allows more efficient movement of aircraft between terminal areas and runways. Other new taxiway crossings were planned to improve aircraft ‘on ground’ safety. Finally, a proposal was put forward to reduce ‘approach minimums’ (the decision height at which a pilot must decide to abort a landing) for four of Logan Airport’s runways. This reduces delays, enhance safety and improve operational flexibility.

The airside facilities also included three new fire rescue stations. These are a central station, a perimeter station and a marine response pier (important since the airport is surrounded on three sides by water). Wallace Floyd Design Group provided the architectural and landscaping design services.

The central station is 54,000ft² in floor space and incorporates ten vehicle bays, living space for 20 personnel on duty, administration offices and a multimedia lecture hall. The perimeter station located at the eastern end of the airfield has 11,000ft², two vehicle bays and living space for five personnel. The location of the perimeter station allows a two-minute first response time to the runways.

Security is particularly important at all US airports following the 11 September 2001 attacks. However it seems to be closer to the heart at Boston Logan owing to the fact that two of the 9/11 involved aircraft were hijacked from there.

The terminal E international gateway has many in-built security enhancements, including a high-security ticketing hall with blast-resistant windows, additional facilities and space for baggage screening and separate rooms for passenger searches (including footwear removal).

“Security is particularly important at all US airports following the 11 September 2001 attacks.”

The airport has also installed a state-of-the art perimeter security system that makes use of infrared surveillance cameras and real-time security analysis software. The infrared cameras are supplied by FLIR Systems Inc of Boston and the Security Data Management System (SDMS) by VistaScape Security Systems.

The FLIR infrared thermography cameras have a zoom facility allowing a resolution good enough to be presented as evidence in a court of law.

The software uses object classification and pattern recognition algorithms and is able to recognise false positives such as birds or waves and even fishermen straying into the security exclusion zone. The SDMS system can then send out security alerts to the required personnel by pager, email, PDA or audible alarm.