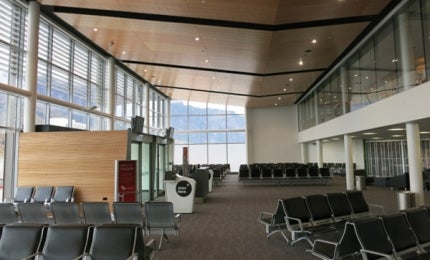 The airport is served by airlines such as Air New Zealand, Jet Star Airways, Qantas Airways and Virgin Australia. It also serves as helicopter and general aviation base. Based on passenger traffic, it is currently the fourth busiest airport in New Zealand. A total of 1.4 million passengers travelled through the airport in the financial year ending June 2015.

Queenstown Airport announced the expansion of new international terminal in October 2014. The project expanded the passenger capacity of the current terminal by one-third to effectively handle the current traffic and accommodate future growth.

Construction on the expansion started in October 2014 and is divided into three phases. The first phase involved the construction of new international arrival and departure lounges, a new passenger area, airside retail stores, baggage claim and handling areas, a covered walkway and office space.

"The project expanded the passenger capacity of the current terminal by one-third to effectively handle the current traffic and accommodate future growth."

Phase Two of the expansion involves special reconfiguration to improve the passenger flow between the customs area, baggage reclaim area and the bio-security check. Phase three will take place after a number of years and will include the development of gate lounges, air bridges and retail space on a new mezzanine floor.

The new terminal building was designed by CCM Architects to blend with the existing terminal design. The construction contract was awarded to Cook Brothers Construction, while RCP is the project manager. The exterior of the building was ready by June 2015.
New retail stores, cafés, a second airline lounge and a mini corporate jet terminal were added to the airport prior to the current expansion.

Baggage handling facility at the airport

Anew state-of-art baggage handling facility and storage area was introduced in December 2010. Covering a 1,470m² area, the $4m facility increased the baggage handling capacity of the airport by threefold. A new baggage carousel and a screening unit for oversized bags were also added. The baggage system was installed by Glidepath.

QAC started a $17m series of major runway infrastructure upgrades in November 2015 to revamp the current runway for handling evening flights by late 2016. The 1,890m-long and 30m-wide main runway will be widened by 15m and resurfaced with asphalt by April 2016.

Parking at the Queenstown Airport

A variety of transport services are available from the airport terminal, including buses, shuttles, taxis and limos. Taxis and shuttles run from the front of the terminal and drop the passengers at their respective destinations, while public transport buses from Connectabus run every 15min to 20min and connect downtown Queenstown with Frankton.