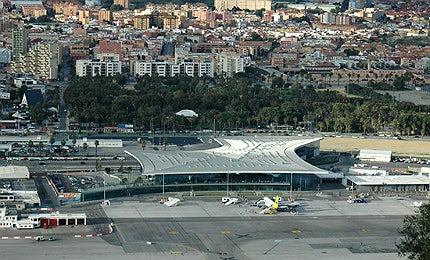 Gibraltar International Airport (formerly North Front Airport) serves as the air transport link to the city of Gibraltar. The airport was established in 1939 during World War II as an emergency landing base for the British Navy.

The airport is located at the centre of Gibraltar and serves around 300,000 passengers per annum. It is owned by the Ministry of Defence of the United Kingdom and is operated by the Government of Gibraltar. It is used for both civilian and military operations. It also serves as Gibraltar’s Royal Air Force (RAF) base. A new international terminal was opened at the airport in September 2012. It was designed by bblur architecture in association with 3D Reid.

"The airport is located at the centre of Gibraltar and serves around 300,000 passengers per annum."

The old terminal built in 1959 was too small for handling the steadily increasing passengers passing through the airport. It had very limited facilities with just ten check-in counters, one baggage carousel, a security gate and two departure gates. Proposals for construction of a new terminal building were therefore discussed.

The project also includes apron extension, additional aircraft parking areas, new freight handling facilities, a dual carriageway, additional customs facilities in the airport and at border crossing and an airport vehicle parking facility. A new access road between the city of Gibraltar, boundary of Spain and the airport terminal is also under construction.

The €85m ($113m) new passenger terminal opened in September 2012 and serves as the main terminal building of Gibraltar International Airport. The terminal has the capacity to handle one million passengers each year. It features a large over-sailing roof structure, which provides shade to external walls covered fully with glasses.

"The €85m ($113m) new passenger terminal opened in September 2012 and serves as the main terminal building."

The terminal is designed to be spacious and comfortable and allows free flow of passengers. The glass fitted exteriors and interiors of the terminal let in maximum natural light.

The two-storey building offers world-class passenger facilities. It includes 16 check-in gates, a departure lounge and an arrival facility. It also contains one out-of-gauge bags check-in that is used for forwarding the baggage that cannot be scanned with normal X-rays to the advanced screening facility.

The terminal is designed to provide an entrance to Spain in addition to a direct entrance through Gibraltar. Construction on the Spanish side of the terminal building is, however, delayed due to certain disagreements between the Spanish Airports Authority AENA and the Ayuntamiento of La Linea de la Conception.

The baggage handling and screening system located in the departure lounge of the airport is divided into Spanish and Gibraltar sections. The luggage from the 16 check-in counters and one out-of-gauge luggage check in are screened by two automatic and one manual X-ray screening system.

The arrivals section consists of a baggage handling system with two flat carousels, from which the passengers pick up their luggage. Prior to these carousels the bags are unloaded to two pier conveyors and then to two independent conveyor paths, and passed to flat carousels.

The airport has a single asphalt runway (09/27) of length 1.8km. The runway intersects the Winston Churchill Avenue road extending to the Spanish border. The traffic on the road is closed during every take off and landing on the runway. A road tunnel under the runway is planned to be constructed to solve this problem.

A new six storey car parking facility was built opposite of the runway as part of the airport expansion project. The new facility can park up to 1,000 cars. One more parking facility is scheduled to be built in place of the demolished old passenger terminal.

bblur architecture was the prime architect for designing, furnishing and branding the airport, while 3D Reid Architecture served as the associate architect under bblur. NACO was involved in master planning, functional layout design, airside and landside design and project management of the new terminal.

"According to the agreement the airport will be jointly used by both the UK and Spain."

Dragados was the main contractor responsible for the construction of the new terminal, extension of apron and all other associated facilities at the airport.

Dematic, a logistics and material handling solutions provider, is employed to install the new baggage handling and screening system at the departures and arrivals areas of the new terminal.

Buro Happold was also involved in the construction of the terminal building. It worked on structuring the terminal with the architects and also provided mechanical and electrical services.

A contract for supply of airfield signage systems for Gibraltar airport was won by Friars in February 2011.

London Southend Airport is a regional airport located in the county of Essex. It can be reached via the A127 and is within an hour from central London.

London Heathrow International Airport is one of the busiest airports in Europe. It handled 69.4 million passengers and 1.48 million tons of cargo in 2011.