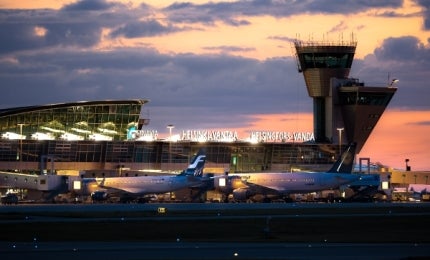 Also known as Helsinki Vantaa Airport, Helsinki Airport is located in Vantaa, Finland. The biggest airport in the country, it serves as the hub for Finnair, the Finnish flag carrier, and is operated by Finavia Corporation.

In 2013, Finivia announced a €900m ($1.15bn) seven-year (2014-2020) development programme to expand Helsinki Airport. The programme will improve the airport’s transit capacity and build more space to handle wide-body aircraft. It will also ensure good flight connections between Finland and rest of the world, as well as make the airport competitive in the international operating environment.

The development programme is expected to increase the annual passenger handling capacity of the airport to 20 million by 2020.

Helsinki Airport is the leading transit airport in northern Europe for long-distance travel and offers the shortest transit between Europe and Asia. The airport handled 17 million passengers in 2016.

After studying a number of alternatives, Finivia decided to expand the existing Terminal 2 rather than build a separate satellite terminal.

"Helsinki Airport is the leading transit airport in northern Europe for long-distance travel and offers the shortest transit between Europe and Asia."

The new model places all services in a single building to make them easily accessible to passengers. Short distances will be maintained between various facilities within the terminal to allow passengers to move from one gate to the other as quickly as possible. The single-roof concept will be operationally efficient, as well as customer-friendly as it provides more ecological solutions compared to all other models.

The Terminal 2 expansion will help to ease traffic congestion. A new security point has been introduced with five new lines, bringing the total number of lines at the terminal to 18. The new lines increased the security check capacity of the terminal by 40%.

In addition to the terminal expansion, the development programme includes the construction of the aircraft stands on the apron, de-icing capacity upgrades, construction of parking spots for both wide and narrow-bodied aircraft, as well as up to 14 new passenger bridges.

The development programme is being implemented in three phases. The renovation of major facilities for long travel passengers and construction of new aircraft parking spots were completed by May 2014 under the first phase. The second phase includes upgrades to increase transit capacity and service improvements for European and domestic flights. The third phase calls for the expansion of Terminal 2.

The central plaza of the €300m west wing is expected to open in late 2018, while the south wing of the terminal began operations in July 2017.

The development programme includes the construction of a 500kWp solar power plant on the roof of Terminal 2. The plant is expected to be fully operational in 2019.

Destia was awarded a €100m apron extension contract in August 2015. Lemminkäinen received a €173m contract from Finavia for performing extension and alteration works for the Helsinki Airport terminal expansion.

Arkkitehtitoimisto HKP and Ramboll Finland secured a contract for the expansion of Terminal 2.

SRV was preferred to carry out alteration works in front of Terminal 2 of Helsinki Airport.

The project received a €230m loan from the European Investment Bank (EIB) for the development of the airport. NIB also provided a €150m 20-year term loan for the expansion and modernisation of Helsinki Airport.

Finavia also spends approximately €100m ($128m) to enable repairs and maintenance, including paving of runways and terminal maintenance at Helsinki Airport, as well as other provincial airports.