Expand
Punta Cana International Airport is the third-busiest airport in the Caribbean and offers regular scheduled flights to South America, North America and Europe.
A major expansion is underway at the airport.
New developments include a new check-in terminal and a larger runway.
About 3.75 million passengers travelled through the airport in 2008. 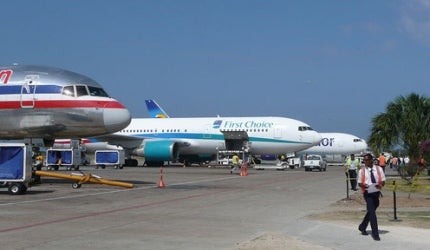 Punta Cana International Airport is the third-busiest airport in the Caribbean and offers regular scheduled flights to South America, North America and Europe. It handles 80 flights daily by 55 domestic and international airlines. In 2011, 4.4 million passengers used the airport, which is a 10.6% increase from 2010. The airport handled 15,000 aircraft movements during the same period.

"The airport is one of the main gateways to the Dominican Republic."

A major expansion was undertaken at the airport to add modern technology and improve facilities.

The $61.9m expansion was funded by Grupo Puntacana and the Puntacana Resort and Club. Major developments included a new check-in terminal, a new larger runway, the expansion of existing taxiways and the construction of a new taxiway and air traffic control tower.

The new air traffic control tower is equipped with state-of-the-art radio and traffic control facilities in the region. A Terminal Approach Radar Control (TRACON) and Automated Weather Observation Station were also built as part of the project. The new tower serves as a back-up for Santo Domingo’s National Radar System.

An International Air Transport Association (IATA) common-use self-support (CUSS) kiosk system has been installed. The system includes new e-ticketing machines, baggage drop areas and 2D bar coding systems for boarding passes and baggage tags. The system is the first of its kind in the Dominican Republic. The system reduces the flight check-in time for passengers on commercial flights by allowing them to print tickets online or at airport kiosks.

Passengers can also drop bags at the bag-drop area and proceed directly to the gate. A new inspection station has also been installed in association with the United States Department of Agriculture. It includes an x-ray machine to screen passenger baggage.

The expansion allows the airport to handle direct flights from Russia. It also provided Punta Cana International Airport with modern equipment such as the only Doppler weather radar system in the Dominican Republic.

The airport has three open-air terminals: Terminal One, Terminal Two and Terminal Three. The terminals are built in traditional Dominican style and their roofs are covered with palm branches.

Terminal One includes a VIP terminal and fixed-base operation (FBO) terminal, and serves international flights. Terminal Two is part of Terminal One and was created during the expansion.

Terminal Three is located next to Terminal One and serves domestic flights from other Dominican airports including Las Américas International Airport and Cibao International Airport. It also handles charter flights. The terminals feature a range of craft shops, restaurants and bars. The VIP terminal has a VIP lounge. Other facilities include a duty-free zone, a bank and money exchange, ATMs and restaurants and snack counters.

Taxis, buses and cabs are available. Passengers can also book airport transfers. Local buses run from the airport to the city. There are prepaid taxi counters near the arrivals area.