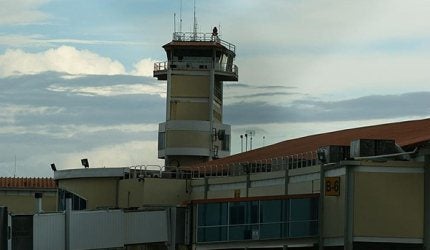 Cibao International is a hub for Aerolineas Mas, with domestic flights to Punta Cana International airport, as well as international operations to Port-au-Prince and Haiti, making it arguably the most important national carrier.

The domestic terminal is meant for general aviation and handles domestic as well as private charter flights. It is located beside the international terminal and has three stands.

The runway is 2,620m long, equipped with an instrument landing system (ILS) and is suitable for larger aircraft such as Boeing 747 for long-haul flights.

The master plan for the construction of the airport was proposed in 1969 and commenced on 15 February 2000. Completion followed in 2002, with the assistance of RS Wallace & Associates. Cibao International was inaugurated on 18 March 2002.

In 2005, the operator of the airport expanded the customs hall and reconstructed the east and west side of the terminal, and a second floor was added to the terminal, which consists of shops and restaurants. The operator also expanded the main international terminal with new facilities, such as check-in area, food court and baggage claim carousel and duty-free zone.

The owners of the airport also planned for the expansion of the runway and a new taxiway beside it; this was confirmed in 2006. The runway is set to be expanded by an additional 400m as part of the plan. There is no planned date for the commencement and completion of the plan, however.

Zortek systems, a system integrator and technological solution provider installed three passenger boarding bridges, common user system (CUTE) and a local check-up system at the airline counters. The contract, valued at $885,000, was executed between 2005 and 2006.

"The upgraded ATC tower will be facilitated with touch-screen operations, radio and telephone interfaces and a system maintenance, administration and reconfiguration terminal (SMART) position, while a digital recorder and weather system will also be installed."

The air traffic control (ATC) system of the airport will be upgraded by Harris Corporation. The international communication and IT Company will supply Liberty-STAR Voice Communication and Control System (VCCS), which feature modular architecture, open-platform software and commercial-off-the-shelf hardware that will provide a satisfactory communication solution for the ATC towers, airline and area control dispatch.

Under the contract, the company will install the systems and provide operation and maintenance training to the technical staff at the ATC tower.

The upgraded ATC tower will be facilitated with touch-screen operations, radio and telephone interfaces and a system maintenance, administration and reconfiguration terminal (SMART) position, while a digital recorder and weather system will also be installed.

The company will supply its voice communication and control system (VCCS) for the air traffic operations. The control tower communication solution will include more systems and equipment, such as crash alarm and red telephone (CART) and low visibility procedure (LVP) intercom to fulfil the operating needs of the ATC tower.