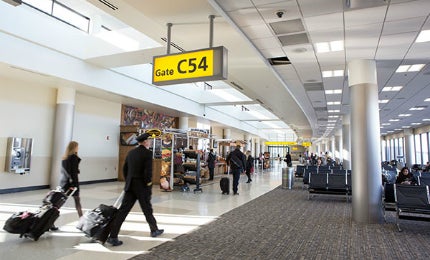 The airport provided a service to 6.35 million passengers and handled 8.28 million pounds of cargo in 2014.

A terminal renovation and modernisation programme was initiated in November 2012 in order to create an exceptional travel experience for passengers and enhance functionality of the existing Port Columbus terminal, which was built in 1958. The multi-phase project is scheduled to be completed by March 2016.

Raleigh-Durham International Airport (RDU) in Wake County, North Carolina, US, has had its modernised Terminal 1 opened, marking the end of several development projects at the facility over a 20-year period.

The terminal modernisation programme includes renovation of the ticket lobby, baggage claim, and concourses A, B and C. Concourses A and C are completely renovated and concourse B upgrades will be completed by summer 2015.

New concessions opened in concourse A and others will open soon in concourse B. Jet bridge upgrades are also included in the modernisation programme.

Renovations in the ticket lobby are in progress and include roof replacement, new skylights and other natural lighting enhancements, as well as LED fixtures, terrazzo flooring, new airline ticket counters and the expansion of checkpoint A from three to four lanes. Likewise, similar modernisation elements are under way in the baggage claim area.

"A terminal renovation and modernisation programme was initiated in November 2012 in order to create an exceptional travel experience for passengers and enhance functionality of the existing Port Columbus terminal."

Turner Construction was selected as construction manager for the extensive ticket lobby modernisation and Corna Kokosing was chosen to manage baggage claim modernisation.

The total investment for the terminal modernisation is estimated to be $80m. The same is funded primarily by passenger facility charges as well as capital reserve and operating funds.

Other improvements at the Port Columbus international airport

In addition to the terminal modernisation programme, Columbus Regional Airport Authority in association with the Federal Aviation Administration (FAA) carried out south runway improvement at the airport. It included relocation of the existing south runway and conversion of the old south runway into a taxiway. The project was completed with an investment of $140m in 2014.

As part of the airport infrastructure improvement, Fairfield Inn & Suites, a Marriott brand hotel, was opened near the Port Columbus terminal in 2014 with an investment of $12.6m.

Facilities at the existing passenger terminal