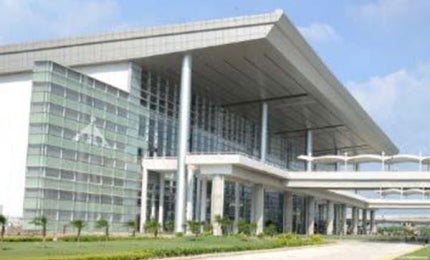 Chandigarh International Airport is located in Chandigarh, a well-planned city, Union Territory and joint capital of two Indian states Punjab and Haryana. Operated by the Airports Authority of India (AAI), the airport is one of the major airports in North India.

The airport has witnessed a significant passenger growth in the last decade, from 69 million between 2004 and 2005 to 188 million between 2014 and 2015, recording an average growth rate of 12% a year. To keep up the pace, the AAI initiated the construction of a new international terminal building in 2012, few kilometres away from the existing airport, with a peak handling capacity of 1,600 passengers an hour.

Built at a cost of Rs9.39bn ($143m), the new terminal was commissioned in September 2015. It will handle both domestic and international flights, while the existing domestic terminal will be used for other civil aviation purposes.

The project is expected to create a positive impact on the economic development of the catchment areas and improve the overall connectivity for tourism and trade in the country.

Details of the new international terminal at Chandigarh Airport

The new integrated terminal is located on a 300-acre site in Jheorehri village near Mohali. The 53,400m² building has two levels with a common curb front. It is composed of glass and steel and has state-of-the-art equipment and passenger facilities.

Chandigarh International Airport Ltd (CHIAL), a joint venture between the AAI, which holds 51% equity, and the governments of Punjab and Haryana holding 24.5% equity each, is responsible for the operations and maintenance of the terminal.

“The project is expected to create a positive impact on the economic development of the catchment areas and improve the overall connectivity for tourism and trade in the country.”

The terminal design contract was awarded to Molen Associates, an architect based in Hong Kong.

The airport has a single runway, designated 11/29, which is 2,743m-long and 45m-wide. The runway is equipped with an instrument landing system (ILS CAT) and a precision approach path indicator (PAPI).