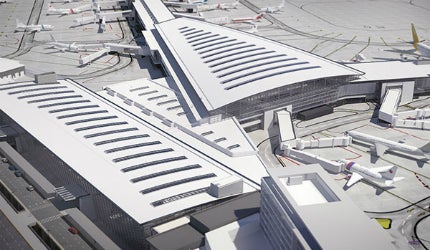 The Calgary Airport Authority, the operator of Calgary International Airport (YYC) located in Alberta, Canada, is undertaking a major expansion at the airport. YYC is the country’s third busiest airport and, with more than 200 flights a day to 78 non-stop destinations, is Alberta’s gateway to the world.

Construction on the airport development programme began in 2011 and is scheduled for completion in late 2016. Estimated to cost more than $2bn, the expansion is the biggest ever undertaken by the authority and includes two major projects, the runway development project and the international facilities project.

Prince George Airport is a small international airport that serves the City of Prince George in the Northern Interior region of British Columbia in Canada.

A new parallel runway 17L-35R was built as part of the $620m runway development project. Its construction started in 2011 and operations began in June 2014. The 14,000ft-long, 200ft-wide runway is the airport’s fourth runway and Canada’s longest.

While the airport’s airfield system has always been capable of handling the world’s biggest aircraft such as Airbus A380-800 and Boeing 747-8, the airport’s newest runway allows aircraft to depart without any payload restrictions. Due to Calgary’s high elevation, the air is thinner and, therefore, requires a longer runway for departures.

Approximately 7.5 million cubic metres of earth was moved and 500,000m³ of concrete was poured on the site to construct the new runway. Centreline lighting made up of 5,000 LED inset and edge fixtures were installed on the runway and high-speed taxiways, making YYC the first Canadian airport to use 100% LED lighting on a runway.

A concrete apron around the new terminal, Category III(a) navigational aids, and two taxiway underpasses were also built as part of the runway development project.

Details of the international facilities project

The international facilities project (IFP) involves the construction of a new international terminal for international and US-bound passengers on the east side of the existing terminal building at an estimated cost of $1.4bn.

Construction of the terminal is scheduled to be completed in late 2016. The expansion will bring in new connection processes that will facilitate easy post-security movement between international, transborder and domestic terminals, as well as a 600m-long secure airside corridor.

The secure corridor will feature moving walkways and a new compact transit system (CTS). The uniquely designed CTS will have the capacity to transport up to ten passengers quickly and efficiently between the concourses in the existing terminal to the new terminal.

Designed by Dialog Design, the new 183,500m² international terminal will be more than double the size of the existing facility. It is expected to meet the airport’s projected capacity demands well into the future.

It will be a five-storey building with a 48,100m² check-in hall, more than 50 retail shops, restaurants and services, as well as a 318-room four-star hotel operated by Delta Hotels and Resorts. Its roof area will be more than 53,000m², out of which skylights will occupy 5,000m² to fill the terminal with natural light.

The terminal exterior will be made up of a curtain wall system that combines double-wall and triple-glazed systems to capture and remove heat. The facade will contain active louvers, motorised horizontal blinds, operable windows, and 29,800m² of glass panelling. Solar tracking and sensors on the facade will be integrated with the building management system in order to optimise performance throughout the year.

A state-of-the-art Tote Tray baggage handling system will be installed, consisting of approximately 9km of conveyors and eight scanning machines.

“The new terminal will feature 24 new aircraft gates with provision for future expansion to 36 gates.”

The new terminal will feature 24 new aircraft gates with provision for future expansion to 36 gates. It will be the first airport in North America to introduce a call-to-gate system.

Passengers will be provided with a gate number approximately 30 minutes prior to boarding, giving them ample time to enjoy the shops and services while receiving updates on their boarding gate.

Other projects under the development programme

A new 300ft-tall air traffic control tower began operations in May 2013. It is the highest free-standing tower of its kind in Canada and was built to accommodate the expanded airfield system.

It will contain 588 vertical geothermal wells, each with a depth of 123m, to provide heating and cooling. Four cogeneration units will generate 6,500MWh of power a year, which constitutes 83% of the winter heating load and 36% of peak heating load and offsets 4,900t of CO2 a year.

Two rainwater harvest tanks will each capture and reuse 500,000l of rainwater for low-flow plumbing fixtures. Other sustainable features of the terminal include 660km of in-floor radiant heating tubes, extensive use of skylights throughout the facility, and an energy-efficient baggage handling system.