The TetraFlex® Group Bridge allows for group calls between any independent TETRA or analogue networks, creating interoperability between many different systems. 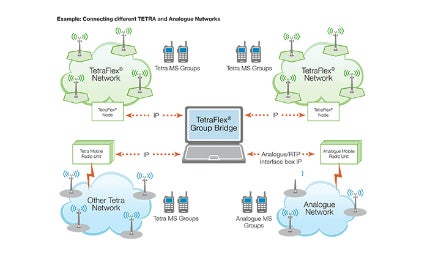 The TetraFlex® Group Bridge allows for group calls between any independent TETRA or analogue networks, creating interoperability between many different systems.

TetraFlex Group Bridge is a highly flexible solution. It can be used to perform group calls and SDS messages between independent networks, from one TetraFlex network to any other TETRA network, or even from TETRA to analogue networks.

The TetraFlex Group Bridge solution is suitable for creating any cross-organisational communication between organisations that are normally organised on different networks. Typical examples include group calls between military, police and other emergency units, or even between local, regional or national networks during catastrophes and other mission critical operations.

In short, the TetraFlex Group Bridge can support any communications interoperability challenge you set it.

Complete interoperability and ease of use

Welcome to a World of Professional Radio Communications

DAMM TetraFlex® Systems have been specifically designed to adapt or grow with you, without incurring major additional infrastructure costs.