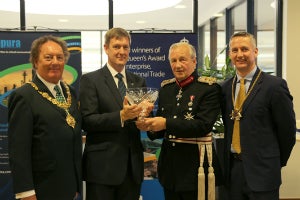 Earlier today the global leader in critical communications hosted the official presentation ceremony at its head office in Cambridge. Sepura was originally awarded the Queen’s Award for Enterprise, International Trade in April of this year.

Sepura welcomed Her Majesty’s Lord-Lieutenant, Sir Hugh Duberly, who, on behalf of Her Majesty the Queen, presented Sepura with the beautiful Dartington crystal glass bowl, which symbolises the prestigious accolade.

The Lord-Lieutenant of Cambridgeshire met and congratulated Sepura employees, who were instrumental in this major achievement and was accompanied by the chairman of the county council, councillor Sebastian Kindersley. Sepura is delighted that the Mayor of Cambridge, councillor Robert Dryden, and senior representatives of UKTI were also able to join in its celebrations.

Last week Gordon Watling, Group CEO and Jonathan Hamill, vice-president government and public safety, were the proud guests at a reception for the winners of the 50th anniversary Queen’s Awards for Enterprise, hosted by the Queen and the Duke of Edinburgh at Buckingham Palace.

Jonathan Hamill commented after the reception: "Visiting Buckingham Palace and meeting the Queen, the Duke of Edinburgh and other members of the Royal Family was a memorable experience. The Duke of Edinburgh showed particular interest in the nature of our business and congratulated us on our win. We were very proud to represent Sepura on such an important event in the history of our organisation".

Gordon Watling said: "The Queen’s Award celebrates Sepura’s consistent achievements and the growth of international business over the last three years, which we could not have achieved without the hard work of every single employee".

Photo – from left to right:

Eastcom and Sepura recently celebrated five years of collaboration by reaffirming their distribution and joint...

Teltronic, part of the Sepura group, is ensuring that critical communications run smoothly at the...

PowerTrunk, part of the Sepura Group, announces that it has been awarded a new TETRA...