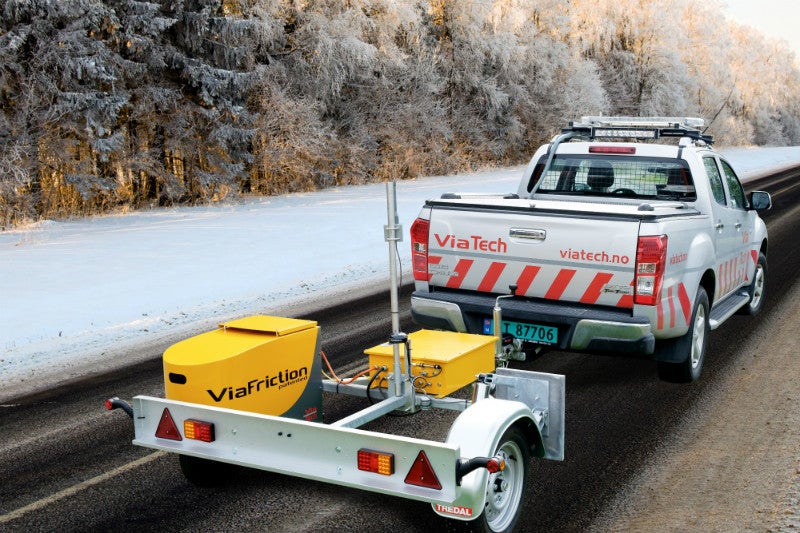 ViaTech’s ViaFriction is a computer-controlled friction device using an electric brake for controlling measure wheel speed. The measure wheel is independent of the other wheels on the friction vehicle.

ViaFriction is a longitudinal force coefficient (LFC) friction tester. It continuously measures friction using a variety of methods, including fixed-slip (skiddometer principle). The longitudinal slip percentage can be set from 1% to 85%.

Variable slip is one of the options available for ViaFriction. Using this method, the slip percentage quickly increases from 0% to 85%, while recording the corresponding friction level.

ViaFriction is specially designed for airport conditions, measuring fixed slip in left or right-wheel track, or in the middle of the runway.
ViaFriction measures friction with a fixed slip integrated in the customers' van, and is specified for airport applications.
A larger version of the ViaFriction CFME trailer is available airports.

Variable slip gives a complete friction-slip curve for the pavement surface. Although the measurement is not continuous, a variable slip measurement supplies important data regarding runway surface properties.

The ViaFriction watering system is compact, and can easily be fitted to a vehicle.

Consisting of a small pump module and a water tank, the watering system creates a 1mm water film just in front of the measure wheel.

No vertical forces are transferred between the ViaFriction unit and the vehicle pulling it. This ensures that the wheel has the correct vertical load on the runway surface at any one time.

ViaTech has so far delivered more than 70 ViaFriction devices. On uneven roads, some of the friction devices can measure as much as 20,000km a year.

The ViaFriction is easily serviceable and only consists of a few parts. In addition, its diagnostics system pinpoints which parts require servicing.

The main task for operators is to stay within strict airport safety regulations, and not to be distracted by the operation of the friction unit. The selection of which runway to measure can be either manual or automatic using GPS. Stopping the measurement and reporting the figures when the measurement is complete are done without operator intervention.

ViaTech can deliver a web server application that can show live friction data and pictures from a ViaFriction unit. The web server displays the live data on a map showing the airport. The current friction values can then be monitored using a standard web browser.

ViaFriction is assembled and tested by ViaTech in Kongsberg, Norway. The software and friction unit development are both performed in-house.

ViaTech has an in-depth knowledge of friction monitoring. In addition to manufacturing and servicing ViaFriction, the company is also responsible for the service and software for the RoAR and Oscar friction devices in Norway.

ViaTech is also a part of the Rosanne friction project, and has the scope to implement new friction standards to add to the following: