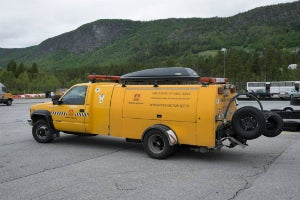 ViaTech has developed and implemented ViaCal, a software tool to make the adjustment of A and B friction (skid) factors easier and less time-consuming.

Therefore, the contractor has to run the ViaFriction day and night to detect areas where they need to make corrective actions, such as salt, sand or snow / ice removal. Afterwards they have to document that the action is within the friction level requirement set by NRPA.

The ViaFriction is a piece of continuous friction measuring equipment (CFME), which gives a continuous record of friction levels on the road using fixed slip. As it is a measuring tool, it needs to be calibrated and harmonised.

In Norway, there are currently about 130 CFME’s including the NRPA’s Roar trailers and the NRPA’s master, Oscar. Planning is required to make harmonisation events efficient.

In the first phase, the Roars harmonise with Oscar at Dagali Airport, before harmonising the CFMEs all across Norway in the second phase. Small friction braking devices (used for spot friction measurement) are also included.

The harmonisation itself follows a strict procedure. Firstly, the Roar measures a defined area of the road or airport. The friction level is announced.

Secondly, the ViaFriction and other Friction devices measure the same defined area. If the CFME measures a different friction level compared to Roar, the A and B factors must be adjusted manually. A new run is then made to see if the friction level output is the same as the Roar. In practise, this loop is time-consuming because you estimate the A and B factor correctly the first time.

Then the specific ViaFriction friction measuring device result is imported and uploaded as a blue graph. By using the ViaCal best-fit function, you simulate the A and B factors that will bring you closest to the master’s red graph.