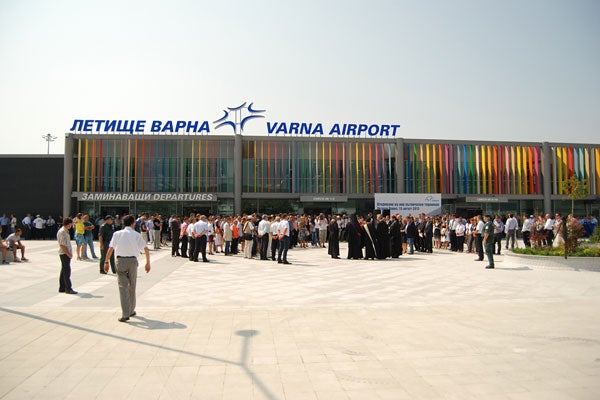 Varna International Airport is located at the north side Black Sea coast of Bulgaria, 8km from the Port of Varna. The third largest airport in Bulgaria, it handled 1.2 million passengers, 10,739 aircraft movements and 33t of cargo in 2012.

The airport is operated by Fraport Twin Star Airport Management (FTSAM). FTSAM is a consortium of Fraport (60%) and BM Star (40%). FTSAM was selected in 2006 to operate and invest in the development of Varna and Burgas international airports for a concession period of 35-years. It invested BGN 70m ($50.55m) for the construction of the new terminals at Varna and Burgas airports.

"The airport is operated by Fraport Twin Star Airport Management."

The new terminal at the Varna International Airport opened in August 2013 and has an annual capacity to handle 1.8 million passengers.

The parking apron at the airport can store up to 24 aircraft. The apron lighting area at the airport will be increased under a BGN8m ($5.39m) project.

The airport has two terminals, which include Terminal 1 and the newly opened Terminal 2, of which construction began in December 2011. Terminal 1 has been closed for operations since terminal 2 opened in August 2013.

The Varna International Airport features an automated check-in system, luggage handling systems, ATMs, custom and border control facilities, a business lounge, and a VIP lounge. It also provides services for disabled passengers. The VIP room at the airport was renovated in 2010.

Burgas International Airport is located 10km north-east of Burgas, Bulgaria. The airport is also known as Sarafovo Airport and covers an area of 2,532,000m². It is operated by Fraport Twin Star Airport Management, a consortium of Fraport AG and BM Star, for a 35-year concession period. The concession was awarded by the Bulgarian government in June 2006.

The airport has one concrete and asphalt coated runway. The 2,500m-long and 60m-wide runway is equipped with ILS CAT I instrument landing system. The runway was rehabilitated in October 2011.

The runway rehabilitation project included widening the safety strips at the runway by 5m and increasing the total width of the runway to 60m. It also included the construction of a new draining system and the installation of light signals on the runway.

Max Boegl Bauunternehmung served as the chief executive for the RRP project. A consortium of Schlegel and Energoproekt served as the designer. Rubikon Engineering OOD provided the construction supervision services. Schlegel acted as the project manager.

A consortium of İÇTAŞ Holding (İÇTAŞ) and TechnoimportExport (TIE) received a contract from FTSAM to construct the new passenger terminal at airport in November 2011.