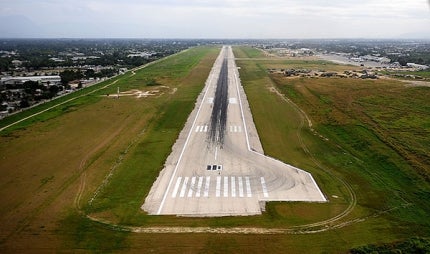 Toussaint Louverture International Airport is one of the busiest airports in Haiti. The airport is located in Tabarre, 13km from Port-au-Prince. It was originally built to serve as an airbase for the US military.

The airport is owned by the Office national de l’aviation civile (OFNAC) of Haiti and operated by Autorité Aéroportuaire Nationale (AAN). It has a single runway (10/28), which is 3,040m in length and paved with asphalt.

The Toussaint Louverture airport was badly damaged due to the earthquake that hit Haiti in January 2010. The damage resulted in the reduction of humanitarian supplies from the international community to Haiti.

"The Toussaint Louverture airport was badly damaged due to the earthquake that hit Haiti in January 2010."

The reconstruction of the airport began in May 2010. It included restoring the departure and arrival halls of the airport. The renovation of arrival hall included the installation of three large baggage carousels and 16 new stations in the immigration room, as well as the expansion of the customs area.

Repairs were also carried out on three passenger loading bridges, three elevators and three escalators. The renovations at the airport increased the terminal’s capacity to about 800,000 passengers in a year.

The Haitian government has invested more than $6m in the restoration of the airport, while the Inter-American Development Bank (IDB) financed $830,000.

OFNAC plans to add 14 new gates to the existing international terminal and construct a new ATC tower with the latest equipment. Works are expected to be completed by 2015.

Odebrecht Construction was awarded with a contract in May 2010 to renovate the arrival and departure halls and rebuild the commercial terminal at the airport. Odebrecht mobilised 15 subcontractors for the project, which included Commercial Interior Contractors and Fisk Electric.

The contract for the improvement of the arrival hall was awarded to Panexus, a Haiti-based company.

The airport has one main terminal building with three floors. The terminal building has a total floor space of about 23,000ft² with one international and one domestic terminal (Guy Malary Terminal). The airport also has a general aviation terminal located in another building, which is used for cargo purposes.

"The airport is located in Tabarre, 13km from Port-au-Prince."

In January 2010, the Federal Aviation Administration (FAA) established a temporary mobile air control tower (ATC) at the airport after the earthquake.

The new ATC tower at the airport is 44ft long, 13ft high and 8ft wide. It weighs around 25,000lbs, and has two diesel-powered generators and supporting fuel tanks. It is also equipped with other tools and support equipment for the flight traffic controls.

The baggage conveyor belt parts installed at the airport terminal were supplied by UnifiedSupply.

The airport has various modes of transportation facilities available, such as bus, taxi and car rental facilities, as well as both long and short-term parking spaces available.