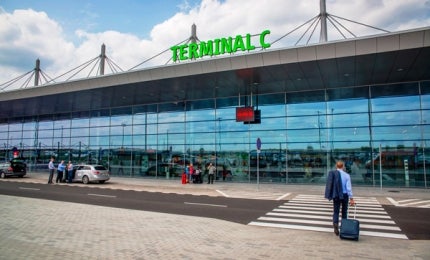 Poland’s Katowice International Airport (KTW) concluded one of its biggest investment programmes by commissioning the third passenger terminal, Terminal C, in June 2015. The new terminal, which is dedicated for arrivals, has increased the passenger handling capacity of the airport to six million passengers a year, from 3.6 million passengers.

The terminal manages the arrivals, including Schengen and non-Schengen zone flights, while Terminals A (non-Schengen) and B (Schengen) handle all the departures.

It was constructed as part of an expansion project initiated by the airport’s management Upper Silesian Aviation Group/Górnośląskie Towarzystwo Lotnicze (GTL) in co-operation with the Centre for the EU Transport Projects (CEUTP), in 2014.

“The new terminal, which is dedicated for arrivals, has increased the passenger handling capacity of the airport to six million passengers a year.”

The zl182m ($48m) expansion plan also includes the modernisation and development of hangars, construction of a new cargo terminal, and expansion of the parking lots.

The new terminal at Katowice Airport is a three-aisled, steel-framed building. Its roof is supported by a steel structure, including sections of steel pipes, and elevates the architectural value of the terminal. The structure was manufactured at Skansa’s steel construction plant in Kielce, Poland, and was later assembled at the airport using two big cranes.

Aesthetically, the building looks similar to the expanded section of Terminal A, which was completed in June 2012.

The Terminal C construction began in the first quarter of 2014 and was completed in 2015, two months ahead of schedule.

The new terminal is a single-storey building constructed adjacent to Terminal B, along the western parking positions of Apron 1. It is 156m-long, 45.5m-wide and approximately 8m-tall.

The building has a surface area of 7,000m², of which the baggage hall occupies 3,600m². The baggage hall features six baggage carousels, which occupy 800m² of area, while passenger queuing area and other public spaces constitute 1,200m².

The reconstruction and modernisation of Warsaw Chopin Airport’s Terminal 1, now named Terminal A, was completed in May 2015.

New roads, squares, driveways, sidewalks and parking lots were constructed as part of the project. Additionally, the entire car hire desks in Terminals A and B were moved to Terminal C.

Contractors involved with the Terminal C

The prime contractor for the terminal development project was Skanska, which won the zl53.38m ($14m) contract in 2012. Besides terminal construction, the firm was also responsible for the supply and installation of the baggage handling system, and integration of new low-voltage systems in the new terminal.

The P1 car park was expanded towards the west, by adding 400 parking spaces, increasing its total capacity to approximately 1,300 vehicles. The expanded parking now has separate spaces for public transport vehicles and car rentals.

A new runway was commissioned at the airport in May 2015 by Budimex, who broke ground for the project in January 2013. The new runway is 3,200m-long and 45m-wide, and carries the same old name, Runway 9/27. Equipped with an instrument landing system (ILS), it is the only runway in Poland that can handle long-haul and wide-bodied aircraft with wingspans of up to 65m.

The runway was built as part of the airport infrastructure extension and modernisation project that also included the development of aprons, reconstruction of three existing taxiways and modernisation of other taxiways. The estimated cost of the project was more than zl267m ($70m), of which 50% was co-financed through the Cohesion Fund.