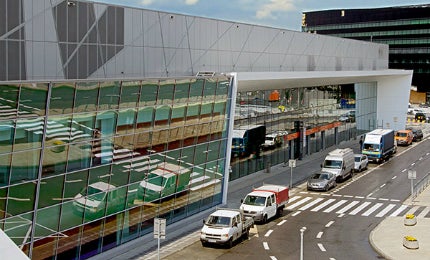 Warsaw Chopin Airport is the biggest and busiest airport in Poland. The reconstruction and modernisation of the airport’s Terminal 1, now named Terminal A, was completed in May 2015.

The terminal redevelopment project is a part of Polish Airports’ (PPL) strategy to transform the facility into a large and important centre in Central Europe and to meet the growing passenger traffic, which is estimated to reach 20 million a year over the next 15 years.

In 2014, the airport handled more than 9.8 million passengers, including 8.7 million international and more than 1.1 million domestic.

Frederic Chopin International Airport, which first opened in 1969, is situated 10km south-west of Warsaw, Poland, on a 500ha site.

Terminal A was constructed by demolishing the existing terminal T1. The design integrated the existing Terminal 2, thus transforming them into a single-integrated state-of-the-art facility.

The new terminal is a seven-storey building, which includes three buildings accessible to passengers. The reconstruction project added a surface area of 60,000m², increasing the overall terminal surface area to 154,500m². Usable floor area of the terminal is 94,082m².

Major associated facilities at Terminal A

A 60m underground tunnel connecting the terminal with the airport transit railway station was also constructed, providing the passengers direct access to the trains without leaving the building.

The terminal’s refurbished 150m-long observation deck integrating a gallery was re-opened to public in May 2015. The observation deck extends a view of the entire airfield and landing area.

Solar rooftop on the new terminal

An innotive solar-powered, panoramic terrace also is featured at the facility. This is equipped with photovoltaic solar panels that cover 80% (7,000m²) of the roof. The solar panels will enable the conversion of solar radiation into electricity and produce roughly 1MW of electricity a year to primarily melt ice.

The consortium of Hochtief Poland and Hochtief Solutions was appointed as the general contractor for the terminal modernisaiton.

Financing for the terminal redevelopment

Overall investment for the project was PLN400m (approximately $109m). The European Union provided PLN91m (approximately $25m) under its Infrastructure and Environment Operational Programme in Poland for the period between 2007 and 2013.

"The terminal redevelopment project is a part of Polish Airports’ (PPL) strategy to transform the facility into a large and important centre in Central Europe."

With the increase in cargo movement, there has been a growing demand for transport aircraft services at the airport, which led to the reconstruction and modernisation of the apron for cargo aircraft PPS 12. The project was initiated in January 2014 and included the construction of a new aircraft de-icing area.

The de-icing area for the PPS13 aircraft was constructed in the southern part of the airport on taxiway Alpha 6 and Lima. The apron can simultaneously accommodate two E-code aircraft and two C-code aircraft, or five C-code aircraft.

Skanska won the construction contract for the project was, while Ove Arup & Partners International won the design contract.