Terminal 4 expansion will add a new concourse G with four new gates. Image courtesy of Broward County.
The floor space inside the terminal will be enhanced to accommodate more concessions and food outlets.
The new Concourse G has been partially opened with two new gates, G12 and G 13.
The new concourse will have a terrazzo floor designed by Brad J. Goldberg.
The old concourse will be fully replaced by mid- 2017. 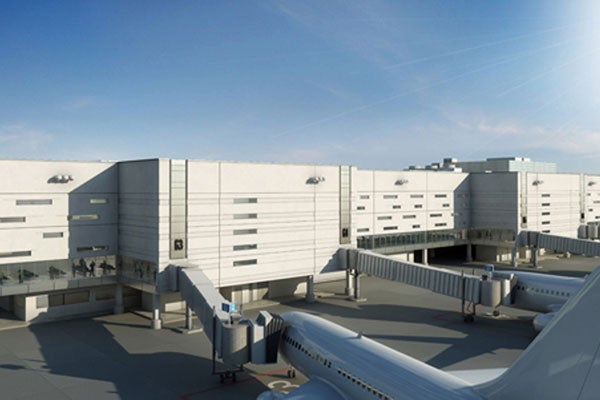 Fort Lauderdale-Hollywood International Airport (FLL), located in Florida, US, is undergoing a major expansion and modernisation project as a part of the $2.4bn Capital Improvement Plan initiated by Broward County, the owner of the airport. The airport is operated by Broward County Aviation Department.

Involving an investment of $450m, the Terminal 4 expansion is one of the major projects that would transform the terminal, opened in 1986, into a modern facility with enhanced passenger facilities and improved operational efficiency to foster international traffic growth.

Funding for the project will come from the airport revenues, passenger facility charges, and federal and state grants.

Will Rogers World Airport is one of three airports owned by the City of Oklahoma City.

The expansion has been planned in two phases: western and eastern. Works on the western phase began in 2013, with the completion scheduled in mid-2015. Phase 2 will begin once the first phase is complete to avoid disruption to regular airport activities.

Ground for the eastern phase is likely to be broken in early 2016, with the completion slated by mid-2017. The whole project is scheduled for completion by early 2018.

The Terminal 4 modernisation at FLL includes expanding the terminal area from the current 60,000ft² to 490,000ft² with 30ft ceilings. A glass-enclosed sterile corridor on the second level will separate international arriving passengers.

The ongoing western phase will see improvements towards the western end of the terminal, next to the existing Concourse H. It includes development of a new Concourse G with 14 gates (four new and ten from the adjoining Concourse H) for both international and domestic flights.

Concourse G was partially opened in July 2015 with two gates, G-12 and G-13, an expanded concession area of approximately 34,000ft², new restaurants, shops and an improved duty-free store, while the other two gates are under construction. The old concourse H will be demolished once the new concourse becomes fully operational.

All gates at the terminal will have common equipment, including self-boarding equipment. East and west vertical gates will offer flexible business operations for domestic, international or commuter travellers.

The baggage handling system will be refurbished with a new free-standing, steel-framed canopy on the air side. The project also includes construction of a five-storey building for offices in the fourth and fifth levels and a 1,000ft-long connector bridge to Terminal 3, which will allow international passengers to move between terminals without additional security checks.

The US Customs and Border Protection (CBP) inspection area will be redesigned to double its capacity to provide quick clearance to international travellers. New technologies developed by CBP will be incorporated to streamline the inspection process. The Transportation Security Administration (TSA) security screening checkpoint will also be expanded to ten lanes to reduce processing time.

The Eastern phase of expansion will include expansion of existing gates, which would be renamed G1-G8, demolition of existing Concourse H, construction of the Broward County Aviation Department (BCAD) offices, reconfiguration of the security screening checkpoint by increasing the number of lanes from six to ten, and construction of the building shell space for the federal inspection service, which will be located between the existing facility and the new Concourse G.

It will also include high-level passenger amenities, a wide choice of concessions, installation of better communication and security systems, and associated aircraft parking.

Electronic charging stations and free Wi-Fi access will be available throughout the terminal.

“The Terminal 4 expansion is one of the major projects that would transform the terminal into a modern facility with enhanced passenger facilities and improved operational efficiency.”

The linear pattern of the floor design is intended to lead passengers from the security areas to the gates and waiting areas. The connector bridge between T3 and T4 will have a cross-section wave design to visually shorten the long corridor.

As a part of the Leadership in Energy and Environmental Design (LEED) initiative, a rainwater-harvesting cistern, which could reduce the water usage at the terminal by 40%, was installed during the western phase.

The harvester collects rainwater and condensate from the air-conditioning units, filters it and pumps it for use in washrooms. It recycles up to five million gallons of water a year. Use of efficient bathroom fixtures is likely to reduce the water usage by an additional 10%.

Energy consumption in the terminal will be reduced by 16% through efficient lighting and air-conditioning. Windows and other ventilation systems will be strategically placed to allow more daylight and reduce the need for artificial lighting. A façade was designed facing south to minimise heat and maximise views.

The termnal’s roof is made of reflective material to reduce heat gain and the need for additional cooling devices inside the terminal. More than 50% of the construction and demolition material will be recycled to save landfill space.

Florida-based construction company MCM received a $128m contract for the eastern expansion of Terminal 4. In partnership with Zyscovich Architects, PGAL served as the lead aviation architect for the western expansion project.