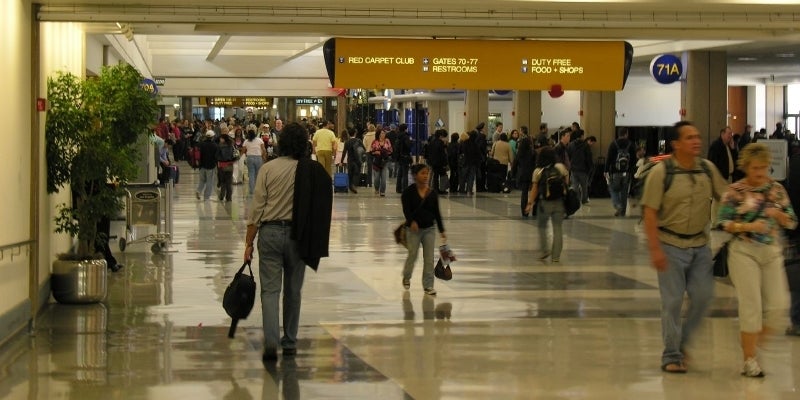 Terminal 1.5 is a proposed passenger facility to be developed at Los Angeles International Airport (LAX).

LAX serves more than 70 million passengers a year and is considered one of the busiest airports in the US.

Los Angeles World Airports (LAWA) have comissioned the project as part of its initiative to modernise LAX’s north terminals; the planned addition will reduce congestion at the airport and connect terminals 1 and 2, as well as provide additional space for passenger facilities.

Los Angeles Board of Airport Commissioners gave consent to the environmental and aesthetic plans of Terminal 1.5 in December 2016. However, the project has yet to receive approval from the Los Angeles City Council.

Construction of the terminal is expected to start once approved, with completion currently scheduled for mid-2019.

Location of Terminal 1.5 at LAX

The proposed terminal will be constructed in the northern portion of the central terminal area (CTA), between the existing terminals 1 and 2. The project site is located towards the east of the Tom Bradley International terminal, and south of the north airfield terminal.

The proposed terminal will be a six-storey building covering an area of 417,515ft², occupying the 400ft of space between terminals 1 and 2.

The new terminal’s design includes storefront glazing for the curbside and glazed walls on the north side, which will reflect the airfield and landscape surrounding the terminal.

Lights outside the terminal will be covered and focused to avoid glare and unnecessary spill-over of light.

All facilities within the terminal will comply with the California Green Building Standards Code (CALGreen) Tier 1 to ensure reduced energy and water consumption.

Facilities and construction of Terminal 1.5

Level 1 of the terminal will be reserved for arrivals, and as such will feature a baggage claim area, baggage handling system, passenger facilities, escalators and elevators, and a non-secure connector between terminals 1 and 2.

Departures will take place at Level 2, which will house check-in counters, ticketing lobbies, other passenger amenities and the connector.

The concourse on level 3 will have a security screening checkpoint (SSCP) along with a Transportation Security Administration (TSA) support space; the connector will also be extended to this level and be accessible via walkways located before the security area. A corridor located after the security area will allow passengers to catch connecting flights between terminals, and also access dining and retail units.

"The new terminal will enable efficient traffic flows, and will also eliminate the need for passengers to undergo repeated security screening."

Certain portions of terminals 1 and 2, particularly part of the Skycap area at terminal 1 and the eastern portion of the ticketing building at terminal 2, will be demolished to accommodate the proposed facility.

The western most exterior wall of terminal 1 will also be removed to enable construction of the new facility directly adjacent to the terminal, enabling the building floor to be connected at all levels.

The proposed terminal will not provide additional capacity for the airport, but will enhance the quality of service at the airport by creating additional spaces. The space will create a new area for security screening that will not only help meet the TSA’s requirements, but also improve safety and security at the airport.

By providing a secure connection between the existing terminals, the new terminal will enable efficient traffic flows, and will also eliminate the need for passengers to undergo repeated security screening.

In addition, the terminal will deliver operational flexibility and efficiency by allowing an uninterrupted link between the ticketing and baggage claim lobbies of both the terminals, helping improve passenger experience.

Furthermore, it will ease congestion by improving processing capabilities of the existing facilities.