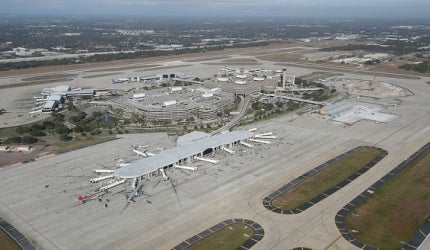 Tampa International Airport is one of the busiest airports in the US. It is located 11km west of the city of Tampa in Florida, US. The airport is spread over 3,300 acres. Hillsborough County Aviation Authority (HCAA) operates the airport on behalf of the County Government.

“Tampa International Airport is one of the busiest airports in the US. It is located 11km west of the city of Tampa in Florida, US.”

The expansion and modernisation project includes improving the interior design of the main passenger terminal, improving 16 restrooms across three levels of the terminal, upgrading the flooring in two levels and renovating the aviation authority business offices and meeting spaces at the terminal.

A new 112,200ft2 cargo facility and ground support equipment (GSE) were added to the airport in 2010. The construction contract for these works was awarded to Hardin Construction Company. Osborn Architects and Engineers were the architects for the project.

LA Design provided the landscape design. RW Armstrong provided design and construction administration services. The construction was initiated in January 2009 and completed in March 2010. The cost of the project was $17m.

The master plan for Tampa international airport has been updated with a $2.5bn three-phased expansion plan. The updated master plan was approved in April 2013. The expansions proposed under the master plan are expected to be completed by 2028.

The phase 1 of the master plan is estimated to cost $943m, which is aims at reducing traffic and parking congestion at the airport. Its construction began in November 2014 and is expected to be completed by 2017. It includes expansion of the main terminal, shifting the car rental facility to outside the terminal and installation of a new 1.4-mile-long automated people mover to connect the rental car facility to the main terminal. The overpass over the George J Bean Parkway will also be widened as part of this phase.

Daytona Beach International Airport is located 5km away from the Daytona Beach in Volusia County, Florida, US.

The main terminal expansion will further include construction of outdoor-indoor decks on the outer east and west sides of the terminal, construction of the consolidated rental car centre entrance, and creation of more open space near the shuttle lobbies and shopping areas.

The first phase is expected to create 9,000 construction related jobs and 1,000 new permanent positions, and is also expected to boost tourism spending by $620m over the next 20 years.

The third phase of the expansion will see a $1.2bn investment to expand the north side of the terminal at three levels. It will expand the international curb side and airside areas for providing additional customs and immigration counters, and a security area. A new international terminal (Airside D), installed with international and domestic gates, will be also constructed during this phase.

The third phase of expansion is expected to be carried out between 2020 and 2028. The expansion will increase the airport’s annual passenger handling capacity to 34.7 million by 2041.

The Hillsborough County Aviation Authority Board approved a $928m grant for the construction of the first phase of expansion in January 2014.

In August 2002, Skanska was awarded a $124m contract to design and build in-line baggage screening system at the airport. The project included integrating the multi-user in-line baggage handling system with 21 explosive detection systems (EDS) machines. It was completed in 18 months.

In August 2011, the US Transportation Security Administration installed new imaging technology in the screening area of the airport. The new technology detects both metallic and non-metallic threats.

The FAA air traffic control (ATC) tower at the airport became operational in July 1972. The ATC tower is 71m (233ft) high and is located on the roof top of the Marriott airport hotel. The ATC building features sound-proof rooms and triple-paned windows.

The airport has four active airside terminals, which are designated A, C, E and F. Airside A was opened in March 1995, and includes gates 1-12 and 14-18 and space for airline lounge.

Airside C was first opened in 1971, later demolished and then rebuilt in 2005. It was designed by architect Alberto Alfonso and includes gates 30-45. Airside E was opened in October 2002.

The Airside terminal F was decided to be renovated, in January 2012, to accommodate growing passenger traffic. The $27.6m renovation expanded the baggage handling space and improved the flow of passengers through security and customs. The renovation work began in early 2012 and was completed in late-2013.

Ground transportation facilities and services at the HCAA operated airport

The airport also has limo service. Eight car rental companies have their offices near the red baggage claim area at the airport.