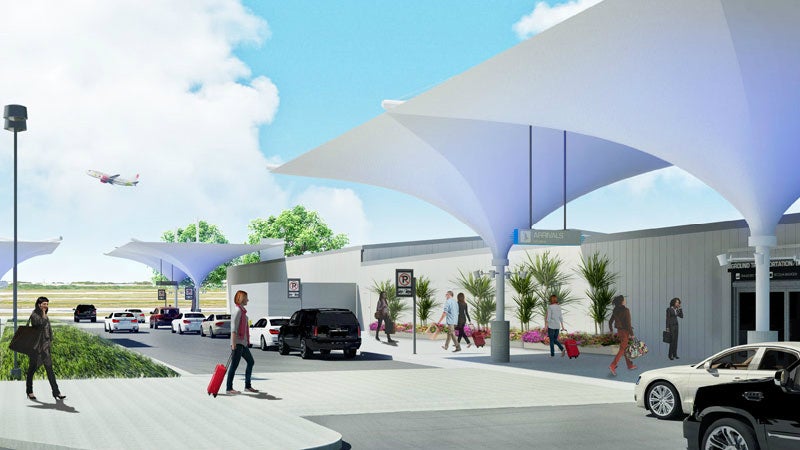 The City of Austin officially launched the newly renovated South Terminal at Austin Bergstrom International Airport in April 2017, marking the completion of a $12m renovation project at the airport.

The newly opened terminal expands the annual passenger processing capacity of the airport, which handled more than 12 million passengers in 2015, by 500,000 passengers.

The South Terminal rehabilitation project was a public-private partnership between the City of Austin, Department of Aviation, and LoneStar Airport Holdings.

LoneStar will be responsible for financing, renovating, and operating the South Terminal and its supporting infrastructure for 30 years.

The terminal cannot be accessed from inside the existing Barbara Jordan Terminal.

The terminal exterior features a series of sleek white canopies that connect it to the three aircraft parking positions. The canopies will be lit with changing colours at night providing a striking appearance to the remodelled terminal. The structures also protect passengers as they move between the terminal and the aircraft.

The terminal interior designs incorporate retro, yet stylish architecture and decor inspired from the mid-20th century. The colours and textures used in the design represent Texas Hill Country, providing a native experience for the passengers.

Features and facilities of the remodelled terminal

Designed for ultra-low-cost carriers, the terminal features three aircraft parking gates, which can accommodate up to 36 aircraft arrivals and departures a day. The terminal’s processing area is completely segregated from the concourse gates to enhance safety and security.

The terminal offers charging stations and a concession area, which offers snacks and beverages, within the post-security departures lounge. Washrooms are available in the ticketing hall, the lounge and baggage claim areas. A complimentary wi-fi service is available throughout the terminal.

An outdoor patio area can be accessed from the departures lounge. In addition to multiple passenger seating options, the patio offers a pet relief area and a food truck currently operated by Stony’s Mobile Pizza Kitchen and Wholly Cow Burgers.

All areas within the terminal, including the outdoor patio and boarding ramps, are wheelchair-friendly, making them easily accessible for persons with reduced mobility (PRM).

"The terminal features three aircraft parking gates, which can accommodate up to 36 aircraft arrivals and departures a day."

Passengers who park in the long-term parking facility can take a shuttle bus to reach the terminal, while short-term parking can be used to drop or pick up passengers.

Fentress Architects was the designer for the South Terminal’s rehabilitation project, while the construction contract was awarded to AECOM’s Hunt Construction Group.

A number of local sub-contractors were involved in construction activities, such as building demolition and fire suppression, while the project also provided opportunities for minority-owned, women-owned and disadvantaged local business enterprises.