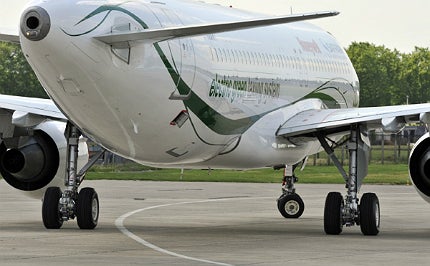 Honeywell and Safran‘s electric green taxiing system (EGTS) demonstration at the 50th Paris Air Show in June 2013 represented what Brian Wenig believes is the industry’s most advanced demonstration of an e-taxi system to date. By using electric motors, which are fitted to the main landing gear, the aircraft is able to push back autonomously and taxi using just electrical power, which is generated from its Auxiliary Power Unit (APU).

With full-scale development expected to start in 2014 – and with market entry due to take place in 2016 to 2017 (initially for a forward-fit, with a retro-fit application to follow) – the programme has developed alongside airline testing partners, operators and other stakeholders since Honeywell and Safran launched their joint venture as EGTS International in 2011.

In addition to the testing on the A320 aircraft, the programme has involved more than 200 engineers at these locations and 3,000 hours of ion-ground manoeuvres on seven bespoke testing benches and rigs.

"The programme has involved more than 200 engineers at these locations and 3,000 hours of ion-ground manoeuvres."

In addition to saving extensively on fuel costs – the company estimates the system saves approximately 600kg fuel as short and medium-range aircraft spend 2.5 hours on taxiways every day, at a cost of around $200,000 per aircraft per year – it offers airlines and airports a broad range of operational advantages and savings.

These include environmental benefits, faster passenger handling and turnaround times, a safer environment for ground crew and lower noise emissions.

In fact, since the aircraft’s "first move" earlier this year, the EGTS on-board has logged more than 200km of rolling tests. "These evaluate the system in a range of load configurations and runway conditions, through a series of complex manoeuvres such as pushback, tight turns and U-turns, according to varying specifications of acceleration and speed," said Wenig.

It was after an extensive modelling process that the team selected the main gear to house the motors rather than a unit fitted on the nose gear, as it became clear that to provide the necessary traction in all conditions the motors needed to be lose to the bulk of the aircraft’s weight. With this first-phase of testing complete, the next milestone will reveal if the system can perform to the same standard when the aircraft is at maximum take-off weight (MTOW).

"In fact, since the aircraft’s "first move" earlier this year, the EGTS on-board has logged more than 200km of rolling tests."

Some industry experts raised concerns about how great the fuel savings can be when the system actually adds weight to the aircraft, but Wenig says it currently adds around 320kg to the aircraft (160kgs per gear), and that this figure is expected to decrease by the time the system enters service in 2016 to 2017. However, he believes even if the weight of the EGTS stays the same, airlines would still be able to save upwards of $200,000 per aircraft per year – a figure he describes as a "conservative" estimate – with two taxis (out and in) per flight.

"We estimate that airlines can save between two and four percent block fuel consumption per cycle," he said. "With many narrow body aircraft completing up to five or six short haul cycles per day, the financial benefits are clear."

Another issue aircraft manufacturers face is whether the system will require changes in the aircraft design itself, particularly landing gear systems that may need to be reinforced to support the additional weight. However, the system that is currently being developed for certification requires minimal changes to the aircraft and its components, says Wenig.

"The solution currently evaluated with aircraft manufacturers is a new control panel in the cockpit, minor modification of the APU (with no envelope change) and upgraded APU generator and modification of the wheels and brakes," he said. "There is no major change required to the main landing gear or the retraction system and we expect installation to be covered under a ‘C Check’, which will take three to four days using optimised retro-fit kits."

For both the airline and airport, the electric green taxiing system is anticipated to bring with it numerous benefits. Not only will staff be safer, but more efficient flight cycles will take place and the impact on the environment is significantly reduced.

"Benefits include faster turnaround times, due to the aircraft’s ability to autonomously push back from the gate, ability to change the gate, reduced ground handling costs, increased ground staff safety due to no engine blast, and lower noise and emissions footprints in the terminal environment," said Wenig.

"In addition, on arrival the ground staff are also able to access the aircraft and start unloading straight away without having to wait for engine shut down and without the health and safety risks posed by a jet blast or noise from the engines, as is the case today."

"Some industry experts raised concerns about how great the fuel savings can be when the system actually adds weight."

In terms of reducing jet engine emissions, as aircraft engines are optimised for flight, Wenig explains that they burn a disproportionate amount of fuel on the ground, "sometimes as much as six percent of the total for flight". It is through using only the APU as the main power source that up to two-thirds of fuel used during taxiing is expected to be saved. "Early estimates suggest that 74% of carbon monoxide and hydrocarbons, 62% of carbon dioxide and 47% of nitrous oxide emissions could be saved with an EGTS cycle compared with a typical dual engine cycle today," he said.

Other advantages include an extension of the main engine life – as main engines will not be started until they are at the end of the taxiway and will power down once off the main runway on arrival – and a reduction in congestion. "Aircraft will be more manoeuvrable than they are with ground tugs today, meaning they will be able to arrive and depart from gates faster and more efficiently, with less stationary time while tugs are de-coupled," said Wenig.

"This current waiting time can have a knock-on effect that causes aircraft to back up and queue during peak times. Aircraft with EGTS will also be able to perform very tight turns, opening up many opportunities for tarmac space optimisation." This, in turn, will also reduce the need for ground tugs and related facilities, proving greater support to bigger aircraft in the airport.

With a full-scale development programme due to start in 2014, leading up to certification, there is no doubt that EGTS International anticipates its electric green taxiing system to positively impact the entire industry, from the ground up.

"EGTS will be for aviation what hybrid cars were for the automotive industry. The potential of fuel savings and emissions reductions that can be had with the system will be monumental for airlines," concluded Wenig.