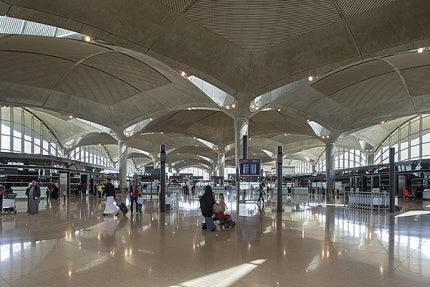 The new international terminal at Queen Alia International Airport, which is situated 35km from Amman, was inaugurated in March 2013. The passenger terminal has enabled a two-fold rise in the passenger capacity of the airport.

"The new terminal had a capacity to handle nine million passengers a year in phase one, which has been eventually increased to 12 million in the second phase of expansion."

The second phase, valued approximately $214m, also included installation of seven additional contact stands and construction of other support facilities. The construction was started in January 2014 and was completed by September 2016.

The new terminal had a capacity to handle nine million passengers a year in phase one, which eventually increased to 12 million during the second phase of expansion. The passenger capacity is planned to be further increased to 16 million a year.

Purpose of the new terminal at Queen Alia airport

The new terminal construction was an element of the larger initiative of the Government of Jordan to increase the revenue derived from tourism.

Queen Alia International Airport is expected to witness approximately 12 million passengers a year by 2020. The new terminal enables the airport to grow at an annual rate of around 6% for the next two-and-half decades.

It consolidates the position of Amman as Levant Region’s primary hub and also supports the growth of tourism in Jordan.

Jordan now has flight services to/from 61 airports worldwide, while before the new terminal existed the number was 40 airports. The number of flights a day has now increased from 110 to 180.

Design of the new passenger terminal at Queen Alia

Queen Alia international airport is situated in the Zizya area, 20 miles south of Amman, the capital city of Jordan. Spread over an area of 22 million square metres, the airport was inaugurated on 25 May 1983. It is owned and operated by Jordan’s Civil Aviation Regulatory Commission (CARC).

All sides of the terminal building are fitted with glass to ensure that aircraft are visible to passengers. The facades are shielded from direct sunlight by means of horizontal louvers, which focus on portions that are more exposed to sunlight.

The forecourt is also expanded to form a plaza, which includes trees and seating. The plaza facilitates congregations of passenger groups and families.

A noteworthy enhancement at the new terminal is the segregation of departures and arrivals according to international standards.
The terminal includes external courtyards that enhance the eco-friendly feature of the building. The trees in the courtyard cleanse the pollutant air before it gets absorbed into the air handling system.

The new terminal earlier had a built-up area of 105,000m², while the second phase of expansion has added 43,513m². It has two piers of departure gates on both sides of the main building. The main terminal building is inclusive of processing areas, lounges, shops and restaurants.

"The passenger terminal has enabled a two-fold rise in the passenger capacity of the airport."

The terminal has increased the total number of gates at the airport to 25. It features a remote lounge for boarding, to cater to various flights at the same time. It also includes clear signage, playing areas for kids, flight information screens, and varied customer support services.

The existing Wi-Fi system has been upgraded, more charging stations have been added, and ten travellators, 24 escalators and 18 lifts have been installed to minimise the transit time and distance for passengers.

AIG appointed The Louis Berger Group as the independent engineering, procurement and construction contractor for the project.

Funding for the new terminal construction