Terminal WA will begin to integrate services at the airport for the first time, making it more efficient and able to handle more passenger throughput.
A &#36;1bn expansion and redevelopment project began in July 2008.
The interior of the imminent WA terminal.
Perth International is still seeing a large increase in passenger numbers every year. Figures have doubled since 2001-2002.
The Qantas domestic terminal has undergone a &#36;50m refurbishment and upgrade project. 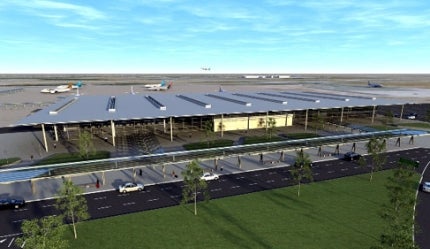 Perth International is the major airport serving Western Australia and is actually the fourth-busiest airport in Australia. Situated near the state capital of Perth, the airport has three main terminals and one minor terminal. Terminal 1 is the eastern international terminal catering for flights that originate or have departed outside Australia; this has five airbridges and a total of seven gates.

There is also a northern general aviation terminal, used mostly by charter aircraft for mining companies.

The airport serves all the major domestic routes and is also strategically placed to serve flights on Asian, Indian Ocean and Pacific routes as well as regular routes to Johannesburg, South Africa and Dubai, United Arab Emirates. The airport has seen increased use in the last few years because of the buoyant nature of the mining industry in the area and new routes being set up by international carriers.

The airport is operated by Westralia Airports Corporation, which has been in negotiation with the state government of Western Australia over the funding of an upgrade for the airport facilities. On 1 October 2009 the corporation completed a new substantial financial process for the airport. The company negotiated $740m from eight banks from Australia, Europe and Asia.

Shareholders are providing another $142m. Current finance from bank debt facilities will be reviewed and the amount will be invested in the airport’s expansion.

In July 2008 work began on the $1bn expansion project at Perth International (Hassell is involved in the planning and design). The first project to get underway was an aircraft parking apron for the new WA terminal (initially for services inside Western Australia). The apron is 26ha and can hold 36 aircraft for regional and interstate routes.

“The long-term goal is to consolidate domestic and international terminals into a single facility.”

This project cost around $20m and was completed in April 2009. The construction of the new single-level terminal WA has started.

Other elements of the redevelopment plan include domestic and international terminals, up to two airport hotels and a multi-storey car park.

For the redevelopment plan there will be three phases to be delivered over the next five to seven years. Phase one includes the new WA terminal, which will also be capable of handling medium-sized jet aircraft used on interstate routes. Phases two and three will include a major development to provide new integrated domestic and international terminal facilities with 40 new aerobridges, airport hotels, a new multi-storey car park and provision for a future public transport system.

In August 2007 Qantas announced the provision of about $50m to carry out major upgrade work to its Perth domestic terminal. Work on the Qantas domestic terminal (Terminal 2) started in mid-2008. A new baggage reclaim area and aircraft parking bay were rebuilt by mid-2009.

“The new terminal will be used by Skywest, Alliance Airlines and Tiger Airways.”

The terminal will have 16 check-in desks, 14 aircraft gates, faster security screening, a bigger departures area, improved Qantas Club, one new airbridge, improved security and extra baggage reclaim facilities. In addition, Westralia Airports are supporting the project with a $19m contribution that will be spent on 1,300 new parking bays, as well as improved road access to Terminals 2 and 3.

In January 2013, the construction contract for the redevelopment project worth A$330m ($343.8m) was awarded to Built Environs. The scope of the contract includes construction of a domestic pier and expansion of the international departures area. The project is expected to be completed by mid-2014.

The long-term goal for the airport is to consolidate the domestic and international terminals into a single facility on the south-eastern side of the airport. This is expected to occur by 2024 and will for the first time make the airfield an integrated entity.

Currently the international and domestic terminals are on opposite sides of the airfield with little shuttle contact, and road contact is seven miles on public roads. By 2024 there is expected to be progress towards establishing a rail link between the Midland line between Bayswater and Ashfield stations and the new integrated terminal at the airport.