One million passengers a year 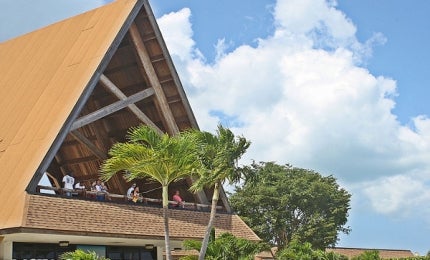 Originally built to accommodate 500,000 passengers, the airport now handles double its capacity of one million passengers a year. It handles approximately 23,999 commercial and private aircraft movements and processes more than 3.8 million pounds (Mlbs) of cargo and 243,480lb of mail.

"The CIAA has proposed a major redevelopment programme aimed at preparing the airport for current and future needs."

With the airport reaching its maximum capacity, overcrowding is experienced throughout, causing inconvenience to the passengers. To overcome the problem, the CIAA has proposed a major redevelopment programme aimed at preparing the airport for current and future needs.

The design concept for the redevelopment project was completed in March 2015. Detailed design is in progress and groundbreaking is scheduled for mid-2015.

The redevelopment project at ORIA is focused on providing relevant infrastructure to meet the anticipated rise in passenger, aircraft and cargo traffic, while also maintaining international standards and regulations.

The multi-phased project will focus on overall expansion of the airport’s footprint. Major works will include renovation of the existing arrival and departure areas to improve the passenger flow and enhance the travel experience.

The project will increase the airport’s capacity from 77,000ft² to 207,000ft². Construction works are scheduled to begin in September 2015 following a competitive tender process.

Besides the redevelopment project, another project to reinforce the runway to accommodate large aircraft such as Boeing 777 will begin this year.

Expansion of the passenger terminal at the Owen Roberts Airport

The existing terminal will be expanded to increase the passenger handling capacity from one million to approximately 2.7 million passengers a year.

The building will be expanded outward rather than upward and will triple in size. It will be developed into a modern facility that can deliver higher level of service and comfort to the passengers.

The single-level terminal will be transformed into a full two-storey terminal with upper level passenger holding and new boarding bridges. The upper floor of the terminal will feature expanded retail and restaurant concessions, which will become a source of income for CIAA.

Further, the arrival and departure lounges will be expanded along with the immigration and customs areas. Additional check-in gates will be included to increase the total number of boarding gates to ten.

The check-in area will be expanded, and additional holding rooms and boarding bridges will be added to the terminal in the future.

Design of the terminal expansion

The terminal expansion is designed to reflect the country’s history and achievements. The design is inspired from the local green sea turtle, which has a flattened curved body and paddle-like arms.

Brisbane Airport, Australia’s third biggest airport, is getting ready for its biggest redevelopment and expansion project since its opening in 1988.

The A-frame design of the existing terminal is retained in the new design that incorporates three A-frames, which symbolise the unity between the three islands, Cayman Brac, Grand Cayman and Little Cayman.

RS&H was also contracted to provide a masterplan update to overcome the airport’s deficiencies and suggest a phased execution plan for the improvements.

Financing for the redevelopment project

The total estimated investment for the redevelopment project is $55m. It will be met primarily through the airport revenues from passenger facilities charges. The state government has committed to invest $15m for the project.

The airport features a single runway, designated as Runway 08/26, which is 7,008ft-long and 150ft-wide, and four taxiways. It also features two aprons, one for general aviation and the other for commercial aviation. A service roadway connects the two aprons, while another service road is across the main apron and two service access roads are at either end of the main apron.